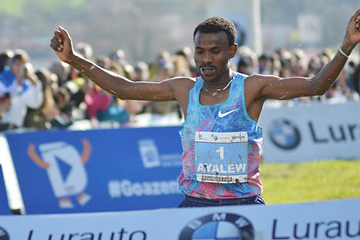 Bahrain’s Aweke Ayalew followed in the footsteps of teammate Sadik Mikhou with victory in the senior men’s 10.6km at the Cross Internacional de San Sebastian on Sunday (28).

On a mild afternoon with heavy underfoot conditions (the winning time was almost three minutes slower than last year), Ayalew made a strong run from home in the last kilometre to defeat 2015 world U20 cross country champion Yasin Haji from Ethiopia.

Ayalew crossed the finish-line in 32:54 with Haji finishing two seconds down. European 5000m champion Ilias Fifa was third in 33:10 with European 10,000m champion Polat Kemboi Arikan from Turkey fourth in 33:21.

In a clash of the steeplechasers, Kenya’s Daisy Jepkemei won the women’s 8.6km in 27:52 ahead of teammate Norah Tanui (28:10). Olympic 3000m steeplechase champion and world record-holder Ruth Jebet, who was contesting her third race in the space of a week, wasn’t a factor on this occasion, dropping off the pace early and finishing a distant third in 28:49.

Brigid Kosgei showed her initial preparations are going well ahead of the London Marathon with a commanding victory at the Eldoret Discovery Cross Country on Sunday (28).

In her first race since demolishing the course record at the Honolulu Marathon in December in 2:22:15 with a big negative split of 1:10:25, Kosgei ran out triumphant by 10 seconds in the senior women’s 8km, crossing the finish-line in 27:31 with Vivian Kiplagat second in 27:41.

Kosgei will return to action next month at the Ras Al Khaimah Half Marathon on 9 February on the road to the London Marathon on 22 April.

In a race featuring a spate of renowned road racing specialists, Prague Marathon winner Valary Jemeli made up the podium in 27:49. Visiline Jepkesho crossed the finish-line in fifth in 28:21, one place ahead of world marathon champion Rose Chelimo of Bahrain in 28:23.

With reigning champion Bedan Karoki absent from this race in order to focus on the Ras Al Khaimah Half Marathon, Josphat Kipchirchir emerged as the new champion in the senior men’s 10km in 30:24 ahead of Alfred Barkach (30:30) and Nicholas Kipkorir (30:40).

“It was my first cross country [race] this year and thus it was competitive but I’m grateful that I eventually won,” the winner told Citizen Digital. “I am now shifting my attention towards the national championships as I am looking to earn a slot in the team to Algeria.”