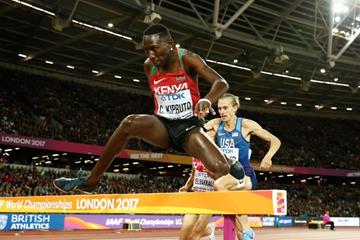 It may have been the first IAAF World Championships men's 3000m steeplechase since 2003 when three countries have been represented on the podium, but Kenya's Olympic champion Conseslus Kipruto ensured it was another victory in this event for his east African nation.

Kenya has won the men's steeplechase at 11 of the 15 past editions of the IAAF World Championships and enjoyed a clean sweep of the medals in 2015.

Kipruto and his Kenyan teammate – two-time Diamond Trophy winner Jairus Birech – led the field out, with US champion Jager tracking every move in third.

At the 1000m mark – reached in 2:51.81 – the Ethiopian trio of Tesfaye Deriba, Tefase Seboka and Getnet Wale took over at the front ahead of Kipruto and Jager, with 17-year-old Ugandan Albert Chemutai close behind. Meanwhile, Kenya's defending champion Ezekiel Kemboi – running for his fifth consecutive world title – was moving up through the field, along with Chemutai's Ugandan teammate Jacob Araptany, who subsequently stopped to re-attach his shoe and dropped back to 14th and last in 8:49.18.

When world leader Jager took up the running four laps out with the Kenyan trio and Elbakkali – who has two 8:05 clockings to his name in 2017 – lined up behind him, it was clear it was going to be something of a USA v  the might of Africa showdown.

After passing 2000m in 5:35.46, Birech was the first to crumble, as Kemboi also became detached 700m from the finish, leaving Jager, Kipruto and Elbakkali – the fastest three in the world this year – to battle it out for the medals.

Kipruto made his move on the back straight of the final lap. Although he was caught on the water jump, the Kenyan proved too strong for his rivals, breaking clear on the home straight.

The 22-year-old made sure he enjoyed his first IAAF World Championships triumph too, having taken silver in 2013 and again in 2015 when he broke his shoe on the final lap, gesturing to the crowd as he approached the finish line.

"I used my plans well and last night for morale I told myself: 'I am Olympic champion and that others must break me',” explained the winner. “There are others who are strong, but I knew if the race was around 8:10 that I was going to win."

After placing fourth at the Olympic Games last year, 21-year-old Elbakkali took his first global championships medal, while Jager became the first US man to collect a World Championships steeplechase medal in third.

“I ran it the way I thought would give me the best opportunity at winning, by taking it out,” said Jager. “After silver last year in Rio, I wanted that upgrade to the gold this time around, but I'm really happy to be on the podium.”

Three-time Olympic medallist and twice world medallist Mahiedine Mekhissi of France finished strongly for fourth in 8:15.80, ultimately less than three tenths behind a fading Jager. Some distance behind, Jager's US teammate Stanley Kebenei (8:21.09) pipped Canada's Matthew Hughes, who recorded a season's best of 8:21.84 in sixth.

The Ethiopian trio placed seventh to ninth, with Chemutai 10th and Kemboi and Birech fading to 11th and 12th respectively. 2014 European champion Yoann Kowal finished 13th, having lost ground due to a fall.