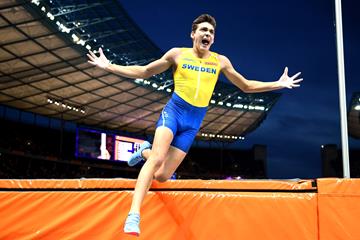 They must have known this day was coming, even if the hurried nature of its arrival took them by surprise.

At the Olympic Stadium in Berlin on Sunday night (12), on the final day of the European Championships, Armand ‘Mondo’ Duplantis came of age in the men’s pole vault and some of the world’s best exponents of the event could only watch, with a mixture of awe and appreciation, as the 18-year-old set a world U20 record* of 6.05m to take gold.

It made Duplantis the youngest ever to win a men’s field event in the 84-year history of the championships, and provided a fitting climax to what was a captivating week in the German capital.

It proved a competition for the ages, with the first four all going over 5.90m, three of them with lifetime bests. As it turned out, Duplantis’s biggest threat came not from France’s Renaud Lavillenie or Polish duo Piotr Lisek and Pawel Wojciechowski, but neutral athlete Timur Morgunov, who smashed his personal best to take silver with 6.00m.

Duplantis had one minor blip at 5.80m, going over at the second attempt, but from there the youngest athlete in the field was the one in complete command, first-time clearances following at 5.85m, 5.90m, 5.95m, 6.00m and 6.05m. The bar never had a moment’s worry from his Swedish singlet, and that was more than enough to give him gold ahead of Morgunov.

Lavillenie took bronze with 5.95m, with Lisek breaking new ground in fourth, unlucky to miss a medal after a PB of 5.90m.

“I do not think that there are any words in this world to describe what I feel,” said Duplantis. “I am on the top of the world, so happy.

“I had to switch poles at the higher heights for the ones I have never used before. After I jumped six metres, I just knew I needed to go higher to solve it. It was crazy.”

While the men’s pole vault heralded the arrival of a new king, the woman who may well be the world’s most dominant athlete continued her reign elsewhere. Hammer queen Anita Wlodarczyk already has two Olympic gold medals, three world titles and now she has a fourth European title, the Pole slinging a championship record of 78.94m to take the title with ease.

“I have so many medals that it is hard for me to find the right motivation at every competition but I want to win and I was also aiming for 80 metres,” she said. “I had to fight until the end, but I come out of this competition with a smile on my face.”

Nelson Evora rolled back the clock in the men’s triple jump, the 34-year-old winning his first major championships outdoor title since 2008 with a best of 17.10m.

“I have been longing for this European title for a while, and today I finally did it,” said the Portuguese triple jumper. “Age doesn't really matter; the most important is to have high expectations and aspirations. Earlier this season I had to deal with an injury and had to work really hard to be here.”

The biggest roar of the night was reserved for the women’s 3000m steeplechase, where Gesa Felicitas-Krause kicked for home off the final bend to claim victory in 9:19.80, sending the sizeable home crowd into rapturous celebrations.

Switzerland’s Fabienne Schlumpf claimed silver in 9:22.29, while Norway’s Karoline Bjerkeli Grovdal held on for bronze in 9:24.46.

Muir and Hassan live up to expectations

Britain’s Laura Muir was equally dominant en route to her first gold medal in a major outdoor championships, the 25-year-old surging to the front with a little over 1000 metres to run and churning out a pace no one else could match.

“I knew the pressure was on and I'm really glad Laura Weightman was right behind me so both of us could be in the podium,” said Muir. “I was only convinced I was going to win when I was about to cross the finish line.”

Sifan Hassan claimed her third European outdoor title – her first at 5000m – with a supreme display in the 12-and-a-half-lap race, though 10,000m champion Lonah Chemtai Salpeter’s bid  was derailed in bizarre circumstances, the Israeli miscounting the laps and easing up at the bell before realising her mistake. She soon started running again and crossed the line fourth but was then disqualified for stepping inside the allotted curve on the opening bend.

“My plan was to go in front in the last 800 metres for the final sprint and I did what my coach told me,” said Hassan. “That was an amazing race.”

Earlier in the day, Belgium’s Koen Naert produced the performance of his life to claim gold in a championship record of 2:09:51 in the men’s marathon, with Switzerland’s Tadesse Abraham second in 2:11:24 and Italy’s Yassine Rachnik third in 2:12:09.

“I was feeling particularly strong today, but equally apprehensive,” said Naert. “I guess I simply turned all that stress into power and confidence throughout the race. It's really difficult to believe this has happened. I knew I could get a medal, but never expected it to be gold.”

Belarus’s Volha Mazuronak survived an early nose bleed to claim gold in the women’s marathon in 2:26:22 after a duel with France’s Clemence Calvin, who finished six seconds behind in her debut at the distance. Czech Republic’s Eva Vrabcova-Nyvltova took bronze with a national record of 2:26:31.

“The race was very difficult especially because of the complication at the beginning with the nose bleed,” said Mazuronak. “I know it must look horrible but it is a sport and those things happen. My first big individual medal and I am so happy for it. The level of the race was so high.”

At the end of a magnificent week of competition, Britain topped the medal table ahead of Poland, thanks in no small part to two supreme displays of their sprinting ability in the 4x100m relays.

Their women came from behind to take gold thanks to a majestic display of speed by double sprint champion Dina Asher-Smith, who hit the line to hand them the title in 41.88. “I'm really happy to be here and run with these girls and I'm glad I was the last one to run – it was easy,” said Asher-Smith.

“It's an amazing way to end these championships, especially for some of us who are not happy with our individual results,” said Adam Gemilli. “If I have to use a word to define us, I'd say unity or versatility.”