Host nation Russia regained their title from defending champions Germany at the European Team Championships in Cheboksary, which concluded on Sunday (21).

They ended the weekend with 368.5 points, 22 more than Germany with France further back in third.

Germany pushed Russia all the way, though, and started off the second day with victories from Richard Ringer in the 3000m and Christina Schwanitz in the shot put.

Ringer sprinted away from the field on the last lap to win in 8:34.35, while Schwanitz dominated the shot as expected, throwing 19.82m to finish more than a metre in front of Russia’s Irina Tarasova.

But Russia responded by scoring maximum points in four other individual events.

After two rounds of the long jump, just the count-back record separated the top three jumpers as Darya Klishina, Olga Sudareva and Sosthene Moguenara all jumped 6.79m. Klishina then sailed out to a season’s best of 6.95m (1.6m/s) in the next round, while Sudareva produced a PB of 6.86m with her final leap.

World bronze medallist Sergey Shubenkov was a convincing winner of the 110m hurdles, clocking a season’s best of 13.22 to finish 0.2 in front of European indoor champion Pascal Martinot-Lagarde.

World indoor champion Maria Kuchina was tied with European champion Ruth Beitia in the high jump as they both went clear at 1.97m on their first attempt. But Kuchina then popped over 1.99m while the Spaniard failed two attempts at that height and one at 2.01m.

Russia’s other individual victory of the day came from Anna Shchagina in the 1500m. She won by exactly one second in 4:15.22 with Norway’s Karoline Bjerkeli Grovdal taking second place.

The hosts ended the day with victory in the women’s 4x400m, clocking 3:24.98 to win comfortably over their rivals.

Anita Wlodarczyk produced one of the best performances of the day. The Pole took the lead in the hammer in the second round with 74.38, but improved by almost four metres with her final throw, sending her implement out to a competition record of 78.28m, the ninth-best throw in history.

Former world record-holder Betty Heidler also saved her best for the last round, moving from fourth to second with a season’s best of 75.73m.

Wlodarczyk’s fellow world record-holder Renaud Lavillenie had a tougher time. The French pole vaulter missed his first attempt at 5.75m and then went straight to 5.80m, but missed that too.

In a competition whereby athletes are only permitted to have four fouls, the pressure was on. But he sailed over 5.85m to go straight into the lead. Germany’s Raphael Holzdeppe got over 5.85m on his third try, his best vault since winning the world title in Moscow two years ago.

One of the biggest surprises of the day came in the men’s 800m. Giordano Benedetti secured Italy’s only victory on the track, defeating his more favoured opponents Pierre-Ambroise Bosse of France and Adam Kszczot of Poland, clocking 1:45.11.

Italy’s only other triumph of the weekend came in the triple jump with veteran Fabrizio Donato leaping a wind-assisted 17.11m to beat Russia’s Aleksey Fyodorov.

Belarus wasn't a factor in the overall standings, but they scored maximum points in the 100m hurdles thanks to Alina Talay. The European indoor champion was level with Russia's Nina Morozova and Britain's Serita Solomon at half way. Solomon hit a hurdle and faded to sixth while Talay pulled away from the field to win in 12.80.

Following the last-minute withdrawal of Britain's Dina Asher-Smith through food poisoning, Ukraine's Natalya Pohrebnyak won the 200m in a PB of 22.76. Team-mate Sergey Smelyk made it a Ukrainian double, winning the men's event in 20.45.

Aside from Wlodarczyk's victory in the hammer, Poland won three other events on the second day to challenge France for the overall third place.

Robert Urbanek was an easy winner of the discus with 63.03m and any of his four attempts would have been enough for maximum points. Renata Plis won the 5000m by more than two seconds in 15:49.29, while Krystian Zalewski won the 3000m steeplechase by a similar margin, clocking 8:37.51.

Finland's sole victory of the weekend came – unsurprisingly – in the javelin. 2007 world champion Tero Pitkamaki was the only man to throw beyond 80 metres, doing so on three of his four attempts with his best mark of 84.44m coming in the final round.

Going into the final event, Russia had already done enough to win and Germany was safe in second place. But just half a point separated France from Poland in third, while Italy was ahead of Britain in fifth place.

Determined to finish in the top five, the British team took an early lead and were two seconds ahead at half way, thanks to a 45.1 lead-off leg from Rabah Yousif and a 44.6 split from Delano Williams. But France began to battle back and a 44.73 split from Mamadou Hanne on the third leg brought them to within half a second of Britain.

Thomas Jordier then continued the momentum with a 45.05 split and caught Britain's anchor Richard Buck, crossing the line in 3:00.47 to Britain's 3:00.54. Poland crossed the line almost a second later, meaning that France maintained their overall third-place finish, while Britain moved back into fifth.

The bottom four teams – Belarus, Sweden, Finland and Norway – will move down to the first league when the event is next held in 2017 (there won't be a European Team Championships next year). The top four teams from this year's first league competition – Czech Republic, Greece, Netherlands and Belgium – will be promoted to the super league. 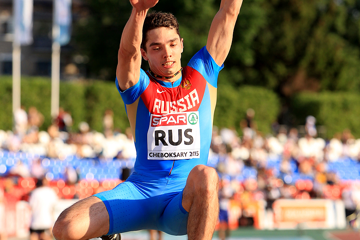