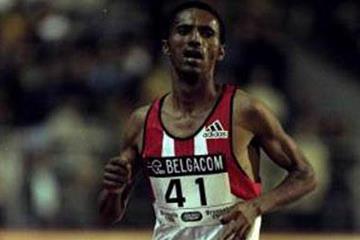 Fita Bayissa of Ethiopia, who was competing at the highest level before Paul Tergat even started running beat the five-time World Cross Country Champion into second place in the Belgrade Race Through History this afternoon (Wednesday) in the Serbian capital.

In the first major international sporting event to be held in Belgrade since the Kosovo crisis, Bayissa tracked the veteran Burundian, Aloys Nizigama through the first four of the six kilometre race around the 2000 year old Kalemegdan Fortress which gives the race its title.

With the little known Moroccan, Abderrahim Goumri also in close attendance, Tergat launched his attempt to win with a sprint along the 200 metres straight which stretches above the confluence of the Danube and Sava rivers. But Bayissa was not to be denied, and he held on to win by a stride in 17:08, with Tergat a second behind, and Goumri third in 17:12, a second ahead of Nizigama.

The smile on Tergat's face suggested he wasn't too upset about being beaten to the tape for the fourth year of the event's short history - he previously lost to Brahim Lahlafi, Hendrick Ramaala and young colleague, Philip Mossima. And the organisers' consolation is that he confirmed his intention to return next year, saying, "It looks as if this is one race I will never win, but I'd love to run it again".

The irony of being outsprinted by the training partner of his track tormentor, Haile Gebrselassie, did not escape Tergat. But he fulsomely congratulated Bayissa, who, being shorter and slighter than Tergat was probably better suited to the switchback course than the Kenyan.

Although Bayissa is younger than Tergat, he was winning the World Junior 5000m title in 1990, when Tergat was just taking up the sport as part of the Kenyan Air Force team. Bayissa said, "It was not an easy course, with the turns and the uphill, but I enjoyed it". The $5000 first prize doubtless helped too.