Five meetings records were broken at the Seiko Golden Grand Prix, an IAAF World Challenge Meeting, in Osaka on Sunday (20).

The meeting also witnessed the start of the 2018 IAAF Hammer Throw Challenge for the men, with three-time world champion Pawel Fajdek prevailing. The Pole reached 78.51m to kick off his quest for a fifth challenge title on a high note.

"This is one of the hardest competitions of the year," Fajdek said, noting the seven-hour difference between Japan and Poland. "But I threw 78 and-a-half and 77 a few times, so it was okay."

Hungary's Bence Halasz, at 20 one of the event's rising stars, was second with a 77.24m season's best, topping Wojciech Nowicki and Olympic champion Dilshod Nazarov, who reached 76.66m and 75.04m, respectively.

Most of the meeting records tumbled on the women's side.

Liu Shiying of China reached 67.12m to take the javelin ahead of Shanghai winner Lyu Huihui, who threw 64.55m. In the pole vault, Kristen Hixson topped 4.61m to beat Canada's Anicka Newell and Iryna Zhuk of Belarus, who each topped out at 4.51m. It was a season's best for the 25-year-old Hixson, and four centimetres shy of her lifetime best.

For the local fans, it was the men's 4x100m that attracted the most attention. Ryoto Yamagata, Shoto Iizuka, Yoshihide Kiryu and Aska Cambridge teamed to clock 37.85, the season's first sub-38-second performance. It was third fastest relay effort ever for Japan, trailing only the 37.60 and 37.68 produced by the silver medal winning squad at the 2016 Olympic Games in Rio. A second Japanese squad was next in 38.64, with China, led off by Su Bingtian, third in 38.72.

There were solid performances elsewhere in the sprints, too.

"I feel really good about today," said Makwala, whose performance was a season's best and first victory after back-to-back 400m losses in Diamond League competition.

Elsewhere, Mostafa Smaili of Morocco won the 800m by more than a second in 1:46.18. Australian Ryan Gregson took the 1500m in 3:37.72 to collect his first international victory of the season.

Takatoshi Abe won the 400m hurdles in 48.97 from compatriot Takayuki Kishimoto who clocked 49.36.

On the infield, Naoto Tobe of Japan beat Yu Wang of China on countback at 2.30m in the high jump. Brandon Starc, the Commonwealth champion, was third at 2.28m. Similarly in the pole vault, Scott Houston of the US beat Japanese Daichi Sawano and Masaki Ejima on countback at 5.50m. Jarvis Gotch of the US won the long jump with 7.95m.

Damien Birkinhead of Australia won the shot put with 20.42m and Cheng Chao-Tsun of Chinese Taipei prevailed in the javelin with 81.69m. 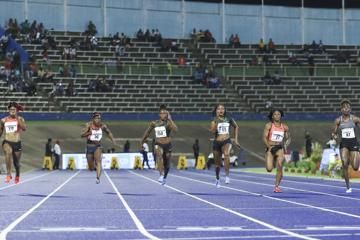