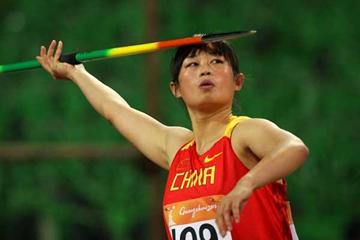 They won four of the seven gold medals on offer and, with 12 gold medals now in their collection, China sits comfortably in pole position in on the medal table.

Li Lingwei in women’s Javelin and Li Ling in women’s Pole Vault were China’s star performers, taking home gold medals with championship records on a day that had no individual finals on the track.

Lingwei, who held the Asian record of 65.11m until it was broken by compatriot Lu Huihui with a 65.62m in April this year, wasn’t at her very best but she sent her implement out to 60.65m in the fourth round to clinch the title and championship record.

However, there was nearly a big upset.

Sri Lanka’s Nadeeka Lakmali delivered a national record of 60.16m, to take the lead in the third round before Lingwei responded like a champion in the next round.

Ling, the silver medallist in Kobe two years ago, had headed the 2013 Asian lists with two clearances over 4.50m but, on her 24th birthday, the Chinese vaulter decided to give herself a little present and soared comfortably over a bar at 4.54m, a personal best and one centimetre better than the championship record set by her compatriot Gao Shuying in 2005.

This was China’s sixth gold medal in the event in seven editions.

Ling seemed capable of going higher but she decided to cry a halt to the contest once the record was hers bag. Another Chinese athlete, Ren Mengqian, equalled her personal best of 4.40m for the silver medal.

Liu Xiangrong, sixth at the London Olympics, finally regained the top spot in women’s Shot Put. The Asian champion in 2007, Xiangrong had to settle for silver in 2009 and 2011 but there was no one to challenge her this time around.

The 25-year-old Chinese took the lead with 18.39m in the first round and never relinquished that spot. A final-round toss of 18.67 merely confirmed her gold medal. Iran’s Leyla Rajabi, the bronze medallist in Kobe, moved up a place to finish second with an 18.18m effort.

Al-Zinkawi, a four-time champion, was targeting his fifth gold but 2009 champion Nazarov, second on this year’s world list with 80.71m, had other ideas.

The Tajik’s final round throw of 78.32m was his best but any of his previous throws would have won the contest with Al-Zinkawi unable to go further than 74.70m

Winatho Wassana won Thailand’s first gold medal of the championships, defending her title in Heptathlon with a consistent performance over two days.

The 33-year-old had a total of 5818 points, more than 200 better than Uzbekistan’s Yekaterina Voronina, who took the silver medal with 5599 points.

The relays had bad news in store for Japan, who are having lean championships with just two gold medals so far. They had swept all the four relays in Kobe but were defeated in both the 4x100m events, finishing second in both races.

Hong Kong delivered the first jolt in the men’s 4x100m. Tsui Chi Ho’s brilliant anchor helped them win their first-ever gold in this event as they put both Japan and China to shade. Hong Kong clocked a quick 38.94 to Japan’s 39.11 with China third in 39.17.

In the women’s sprint relay, China, anchored by 100 champion Wei Yongli, comfortably defeated Japan for the gold medal, clocking 44.01 to their rivals 44.38.