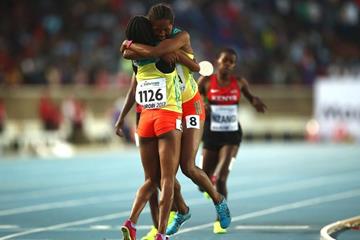 Few athletes will have faced such an intimidating atmosphere as young Ethiopian pair Lemlem Hailu and Sindu Girma, who entered the Kasarani Stadium on Saturday evening to the sound of a near-capacity crowd screaming for their Kenyan rivals.

But the joy of wading into rival territory is that there is little to no pressure or expectation involved, and in the girls’ 1500m final they ran supremely, sweeping to a 1-2 in a last-lap burn-up and spoiling the party for the hosts.

The early pace had been slow, the field passing 400m in a pedestrian 1:13.21 with South Africa’s Nicole Louw leading the way, and the second lap was almost identical, with the field passing 800m bunched together in 2:26.43. By then Kenya’s Edina Jebitok was looming towards the front, seemingly preparing for an early strike, but it would only be the sound of the bell that coaxed her to the front some 300 metres later.

By the time she passed 1200m in 3:35.69, Jebitok was burning all cylinders at the front, trying desperately to shake the presence of Hailu and Girma, who dogged her slipstream on every step. Approaching the final turn they bolted past, and despite close to 50,000 fans screaming their support, Jebitok had no response.

Hailu continued to accelerate down the home straight, breaking the virtual tape in 4:20.80, her last 300m a swift 45.00. "I was sure of winning coming into this race so I just kept my focus," said Hailu. "I'm very happy to have won Ethiopia a second gold medal."

Her teammate Girma came through strongly for second in 4:22.14. "I expected stiff competition from Kenya in this race," she said. "I had prepared well and I'm happy with the silver medal."

Jebitok was resilient in third, reaching the finish in 4:23.16 despite struggling with injury. "I was poised for a win but I felt pain in my left leg and I couldn't gather enough energy to push me through. I am not impressed. I should have won gold at home."

Rachel Nzangi of Kenya came home a disconsolate fourth in 4:24.70, while it was a long way back to early leader Nicole Louw of South Africa, who claimed fifth in 4:33.40.