Burundi’s Francine Niyonsaba took more than two seconds off Genzebe Dibaba’s world 2000m record with a brilliant run of 5:21.56 at the Boris Hanzekovic Memorial in Zagreb on Tuesday (14).

Dibaba’s best of 5:23.75 was set indoors in Sabadell, Spain in 2017 and stood as the outright world record. But, taking advantage of a windless and warm evening for the final World Athletics Continental Tour Gold event of the year in Europe, Niyonsaba strode clear of Olympic 1500m fourth-place finisher Freweyni Hailu on the final lap to win by four seconds.

Niyonsaba went through the bell in 4:20.23, meaning she needed a final lap of about 63 seconds to claim the world record. Hailu tried to move into the lead on the back straight, but Niyonsaba kept her at bay and then kicked for home, eventually crossing the line in 5:21.56.

Hailu finished second in 5:25.86, an outdoor Ethiopian record and just half a second shy of Sonia O’Sullivan’s 5:25.36 clocking from 1994, the fastest outdoor performance before today.

Afterwards, a smiling Niyonsaba said: “I am feeling seriously wonderful. I didn’t realise I could run a world record, but it was my first time here. I came here to do what I have to do.

“I did it. It’s wonderful and it’s fabulous. The pacing was really perfect. I want to thank all the people who came to cheer us.”

One of the most eye-catching performances of the night came in the men’s 110m hurdles where USA’s Devon Allen joined the sub-13-second club.

Ending his season in blistering style following victories in Zurich and Berlin, Allen left Olympic gold and bronze medallists Hansle Parchment and Ronald Levy in his wake as he logged 12.99 (0.7m/s). Levy was second in 13.11 with Jamaican teammate Parchment 0.01 behind in third. 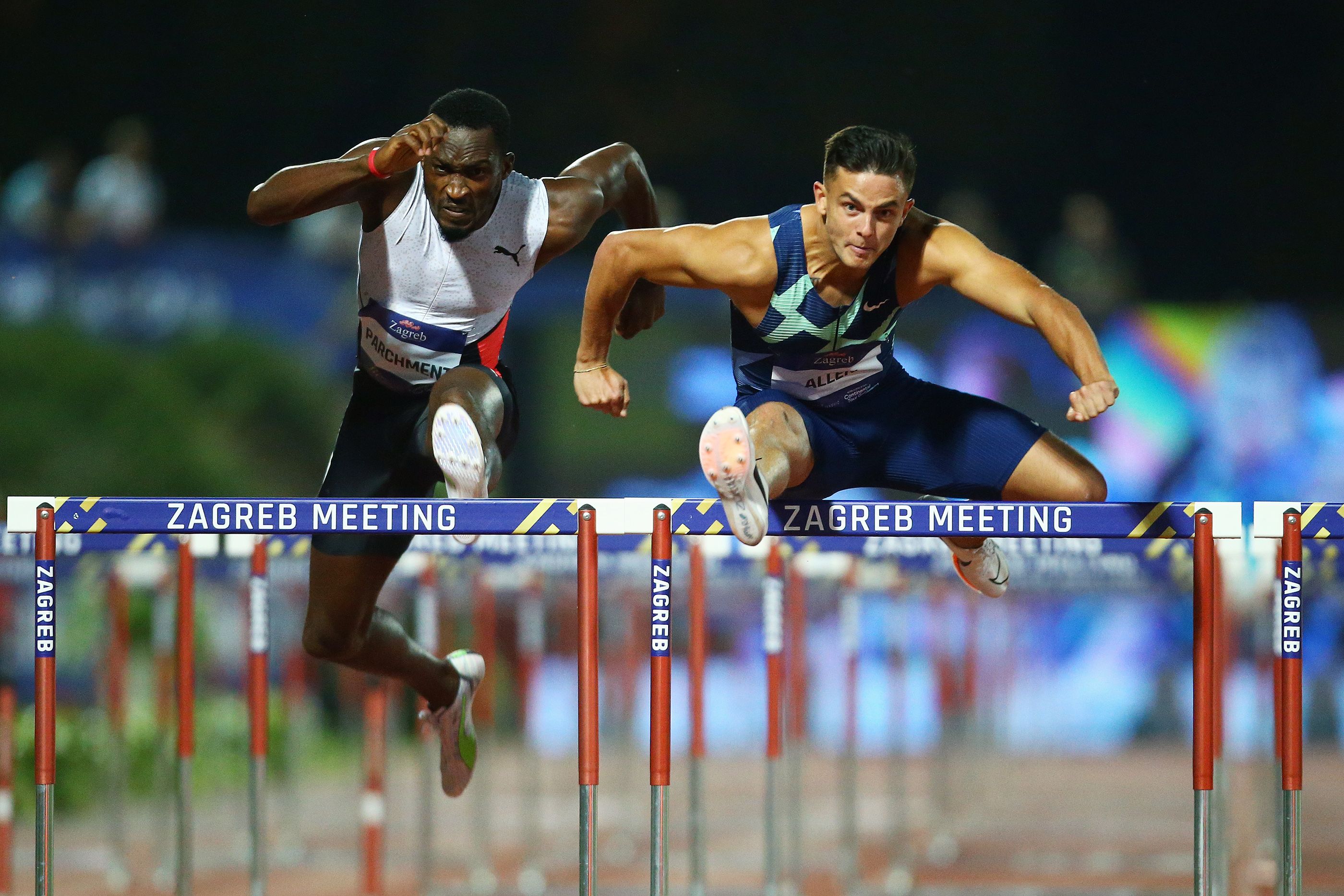 “I’m really excited,” said Allen. “It’s been there, you know that when you are running consistent. It’s great conditions tonight and warm with no wind, with a great crowd.

“I started well and when I am out front, as long as I run it clean, I am running quick.”

A clutch of other athletes were in record-breaking form in the Croatian capital with four further meeting records falling in the course of the evening.

The men’s pole vault saw an incredible five athletes bettering the existing meeting record of 5.76m. But it was Olympic fourth-place finisher KC Lightfoot of USA who best rose to the occasion, clearing 5.87m on his third attempt to win with an outdoor personal best.

Olympic silver medallist and Diamond League winner Christine Mboma of Namibia scorched to a meeting record of 22.04 in the women’s 200m. The world U20 champion was 0.26 clear of Olympic 100m bronze medallist Shericka Jackson of Jamaica, who was 0.05 quicker than Allyson Felix’s meeting record that had stood since 2012.

Three-time Olympic medallist and former champion Kirani James stamped his class all over the men’s 400m. Running strongly from the gun, he stormed to a meeting record of 44.46, slicing nearly half a second off the four-year-old previous best, held by Gil Roberts.

World silver medallist Shanieka Ricketts leapt to a meeting record of 14.77m to win the women’s triple jump. The Jamaican led from the outset, opening with jumps of 14.33m and 14.37m before improving to 14.77m in the penultimate round. Slovenia’s Neja Filipic was second with a PB of 14.37m.

In one of the most eagerly awaited events of the evening, Olympic champion Valarie Allman defied sentimental favourite and her predecessor as Olympic champion Sandra Perkovic the chance of a 10th successive win on home turf in Zagreb in the  discus. 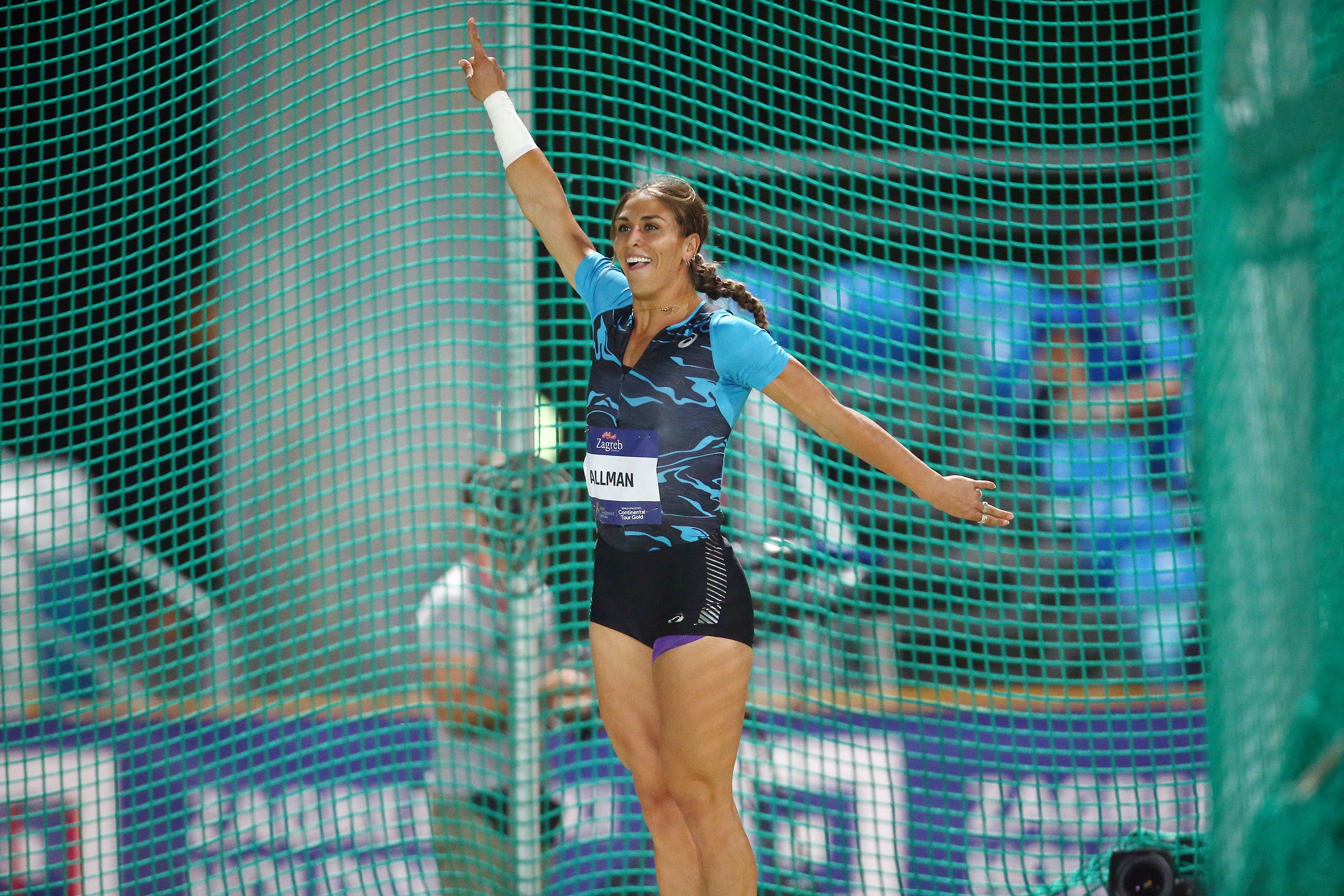 After setting a North American record of 71.16m in Berlin last weekend, the 26-year-old wrapped up a memorable season with a superb final-round throw of 69.63m with Perkovic settling for runner-up with her second-round effort of 66.48m.

Allman had led since the first round when she threw 64.22m before improving to 67.61m and 68.87m in the second and third rounds.

In a tightly fought men’s 800m, Catalin Tecuceanu of Romania enjoyed a breakthrough victory, emerging from the outside to win in 1:44.93. Not only was it a PB, but it also broke the national record of 1:45.41 that had stood since 1985. The 22-year-old didn’t compete at the Olympics as he didn’t achieve the entry standard, but has now won three of his past four races on the international circuit.

He finished ahead of British duo Daniel Rowden and Elliot Giles in 1:44.98 and 1:45.01 respectively. World silver medallist Amel Tuka dropped out at about the 600m mark,

In the women’s 100m hurdles, Diamond League winner Tobi Amusan of Nigeria eased to a comfortable win in 12.61, just one hundredth outside the meeting record.