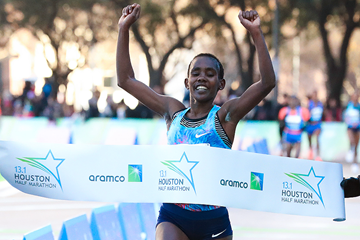 Ethiopians dominate once more in Houston

On a cold day when Ethiopian athletes won three of the four elite races, Ruti Aga’s 1:06:39 victory in the Aramco Houston Half Marathon was the most notable, as the IAAF Gold Label road race on Sunday (14) proved to be one of the deepest half marathons in history.

Compatriots Biruktayit Degefa and Bazu Worku regained their titles in the Chevron Houston Marathon, winning the IAAF Silver Label road race in 2:24:51 and 2:08:30 respectively, while New Zealand’s Jake Robertson prevented an Ethiopian sweep of the titles by winning the men’s half marathon in 1:00:01.

While Ethiopian athletes have traditionally dominated the marathon in Houston, just two of the previous 16 editions of the Houston Half Marathon had been won by an Ethiopian woman. In a fast-paced and exciting contest, this year’s women’s race went down to the wire.

Paced by Gotytom Gebreslase, a lead pack of eight women passed through the first five kilometres in 15:48, suggesting a finishing time comfortably inside 67 minutes. As the pacemaker hit the 10-kilometre checkpoint in 31:33, she was still joined by seven other women: Aga and fellow Ethiopian Buze Diriba, Kenya’s Edith Chelimo, Caroline Chepkoech, Eunice Chumba, Mary Wacera, and USA’s Molly Huddle.

Although the pacemaker dropped out after the half-way point, the lead pack continued at much the same pace, passing 15 kilometres in 47:28. With little more than a couple of kilometres left, Aga began to make her move. At 20 kilometres, reached in 1:03:13, the 23-year-old had a three-second lead over Chepkoech while the rest of the lead pack had fragmented.

Aga extended her lead in the closing stages, winning in 1:06:39 to come within 10 seconds of the North American all-comers’ record set by Wacera in Houston in 2016. The 2012 world U20 5000m silver medallist took more than a minute off her previous PB, but her 2:20:41 second-place finish at the Berlin Marathon in September had suggested that her half-marathon PB was due for revision.

Wacera and Diriba finished third and fourth respectively, both awarded the same time of 1:06:50, a PB for the latter. Chelimo and Chumba followed, clocking 1:07:13 and 1:07:18, both women recording the second-fastest times of their careers.

It was the first half marathon in history in which seven women had finished within 1:07:30.

The men’s half marathon played out in much the same way as the women’s race, only the numbers involved at the start were higher.

After a large lead pack of about 25 runners covered the first five kilometres in 14:23, the pace started to pick up and the 10-kilometre point was reached in 28:32 with 13 men still in contention.

Aside from Robertson, others in the lead pack included Ethiopia’s Guye Adola, Feyisa Lilesa and USA’s Sam Chelanga. The likes of two-time world champion Bernard Lagat and London Marathon winner Daniel Wanjiru had already started to drop behind.

The lead pack remained largely unchanged  as 15 kilometres was reached in 42:50 with Adola and Robertson still running comfortably within the large lead pack. With just a few kilometres remaining, though, Robertson began to make his move and by 20 kilometres he had a 10-second lead over Adola.

Robertson extended his lead by the finish, winning in 1:00:01 to match the PB he set on his debut at the distance when winning in Lisbon last March. Adola finished second in 1:00:15 and was followed by fellow Ethiopians Lilesa and Shura Kitata, both clocking 1:00:20.

It didn’t take long for a lead pack of six to emerge in the women’s race. Ethiopia’s Biruktayit Degefa, the 2016 Houston Marathon champion, was joined by compatriots Meselech Beyene, Belaynesh Oljira and Tsegay Adhana as well as Kenyan duo Gladys Kipsoi and Veronica Nyaruai at the front of the race for the first 25 kilometres.

They passed through 10 kilometres in 34:50 and reached the half-way point in 1:13:09, but the pace began to gradually increase.

Nyaruai, the 2017 Houston Half Marathon winner who was making her marathon debut, was the first of the lead sextet to struggle and she dropped back before the 30-kilometre point. A few kilometres later, Degefa and Oljira, the 2013 world 10,000m bronze medallist, made a break at the front of the race and opened up a 34-second lead on their pursuers.

They remained together until the closing stages but Degefa proved to have the stronger finish and eventually pulled clear of her fellow Ethiopian to win by six seconds in 2:24:51.

A pack of seven athletes – including two pace makers – formed during the early stages of the men’s race. Defending champion Dominic Ondoro dropped out after just five kilometres, but the athletes at the front of the field went on to cover 10 kilometres in 30:11 before reaching half way in 1:03:46.

Aside from the pacemakers, four athletes – two-time Houston winner Bazu Worku, fellow Ethiopian Yitayal Atnafu, Kenya’s Elisha Barno and Daniel Mesfun of Eritrea – were still in contention at that stage.

Mesfun was the first of the quartet to falter, dropping back as the three remaining leaders approached 25 kilometres. Once the pace makers withdrew from the race, Atnafu – who finished third in Houston in 2016 and second in 2017 – attempted a long run for home. He led from Worku by 13 seconds at 30km and extended his lead to 38 seconds at 35 kilometres, but Worku was biding his time.

Atnafu was unable to maintain his pace during the closing stages. His lead shrank to 23 seconds at 40 kilometres and Worku continued to gain momentum, eventually passing his compatriot with about one kilometre left. He went on to win in 2:08:30 with Atnafu crossing the line 37 seconds later. Barno took third spot in 2:09:32.