At the IAAF Diamond League meeting in Doha 12 months ago, the triple jump provided one of the highlights of the night. But instead of it being the men’s event – despite world and Olympic champion Christian Taylor being in action little more than an hour later – it was the women who captured the plaudits on Friday (6).

For the duel between Taylor and Cuba’s Pedro Pablo Pichardo 12 months ago, read the South American pair of Caterine Ibarguen and Yulimar Rojas, who engaged in a wonderfully thrilling contest in which both women were at their very best.

In the second round, Rojas was jumping eighth out of the nine women with just Ibarguen following her. The Madrid-based Venezuelan reached a national record of 14.61m but it was a lead that lasted little more than a minute as Ibarguen responded with 14.77m.

However, the world indoor champion returned to first place when she bound out to 14.79m with her next effort.

Ibarguen fouled in that round and both women put their toes over the plasticine in round four but then Colombia’s two-time world champion showed the grit and talent that had seen her win 31 competitions before Friday night – her last defat coming at the London 2012 Olympic Games to Olga Rypakova from Kazakhstan – when she produced a world-leading effort of 15.04m, a meeting record and the second-best legal jump of her career.

The small contingent of Ibarguen supporters, waving their national flag, went into raptures but the drama was not over and Rojas responded with a wind-assisted (2.6m/s) leap of 14.92m.

Ibarguen added lustre to her series in her final round when she also went out to 14.98m before Rojas, giving it everything, fouled with the last jump of the competition.

The Colombian keeps alive her winning streak and extended it to 32 victories but is probably already musing on the fact that she has her most serious rival since the start of 2013.

“I am happy I started the season by going over 15 metres," said Ibarguen. "I will keep working hard and try to break the world record (of 15.50m set by Ukraine’s Inessa Kravets in 1995) but it has also stood for more than 20 years."

Spare a thought also for Rypakova, who finished third with 14.61m, a distance that would have won many other Diamond League meetings in the past, but was completely overshadowed by the performances from the two South Americans.

By contrast, the men’s triple jump was a little anti-climactic although Taylor achieved his aim of “getting some points” as he described at the pre-event press conference on Thursday.

Taylor, who jumped 18.04m here last year and still lost to Pichardo, found that 17.23m this time was sufficient to take all 10 points under the new Diamond Race scoring system.

In fact, after taking the lead with 17.08m in round two, he was never headed.

He went out to 17.19m in the third round, and with the competition won then jumped 17.23m with the last effort of the competition, despite chopping his last strides before take-off.

“For sure I had higher expectations but it is important to stay healthy," said Taylor. "At the moment, with Pichardo not in action, I am competing against myself."

His closest opponent did, as predicated, turn out to be Dong Bin but China’s world indoor champion had various problems and his only valid jump was 17.07m in the third round before he fouled in the next round and passed his last two attempts. 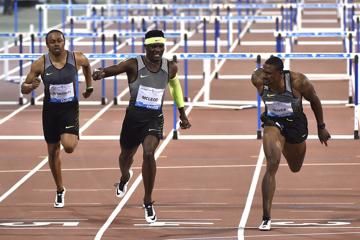 After Doha win, McLeod now the man to beat in... 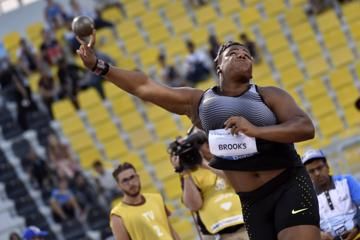