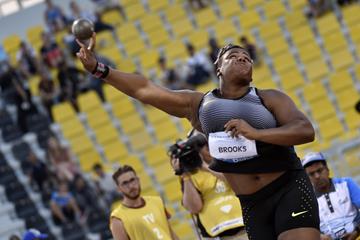 Tia Brooks twice improved on her personal best to win the shot put at the IAAF Diamond League meeting in Doha with 19.48m and become the first winner of a Diamond Race discipline in 2016 after she managed an upset victory on Friday (6).

Brooks got her first personal best when she reached 19.45m in the second round and extended that by three centimetres with her following effort.

Hungary’s world indoor silver medallist Anita Marton applied a little pressure on Brooks when she sent her implement out to 19.22m in the penultimate round but could not improve further with her last effort.

Surprisingly, USA’s world indoor champion Michelle Carter failed to get beyond 18 metres with her first three efforts, having a best of 17.83m and placing fifth after three rounds. Under the new IAAF Diamond League regulation which sees only the top four horizontal jumpers and throwers get three more attempts, she failed to make the cut.

Another US woman to win in the field in Doha was the rapidly improving pole vaulter Sandi Morris, who equalled the IAAF Diamond League record when she went clear with her first attempt at 4.83m.

Both Switzerland’s Nicole Buchler and Greece’s Ekaterina Stefanidi were still in the competition at that stage but neither could negotiate that height.

Morris, the world indoor silver medallist, then had the bar raised all the way up to 4.93m but brought the bar down three times.

Buchler, now 32, took second after clearing a national record of 4.78m on her first attempt.

On a traditionally still and humid evening in Doha, there wasn’t much help from the elements for the discus throwers but world champion Piotr Malachowski still produced a world-leading 68.03m with his last throw to overtake Belgium’s Philip Milanov, who finished one place behind the Pole in Beijing.

Milanov had improved his national record by 36 centimetres to 67.26m in the fifth round but Malachowski, lying in second at that point with 65.81m, wasn’t to be denied his third straight win in Doha. The world silver medallist had no response and could only foul his final throw.

Eilidh Doyle, perhaps better known still under her maiden name of Child, was the strongest over the final 250 metres of the women’s 400m hurdles and showed some crisp clearances over the barriers to win in 54.53 in her first race of the year.

Doyle was just 0.31 away from her personal best and 0.25 away from the meeting record of Romania’s Ionela Tirlea-Manolache, the longest standing meeting record in Doha which has stood since 1999.

Briefly, with a strong penultimate 50 metres off the final bend, Trinidad and Tobago’s world junior champion Machel Cedenio looked like he was going to catch the 2008 Olympic champion but the latter weakened more rapidly than Merritt over the final metres and came home second in 44.68.

Ameer Web won the 200m with an impressive piece of sprinting off the bend to win in a personal best and meeting record of 19.85, taking 0.06 off the former mark and 0.17 off the latter.

Conseslus Kipruto hit the front in the 3000m steeplechase with less than a kilometre to go, after the last pacemaker had stepped to one side – with the 1000m mark being passed in 2:39.40 and 2000m and 5:20:00 to keep the runners on course for an eight-minute finish – and quickly established a 30-metre lead owing to no one being willing to chase him despite the pace dropping slightly.

Kipruto then as good as held his lead all the way to the line. Easing up over the final few metres, he won in a world-leading 8:05.13 with 2015 Diamond Race winner and fellow Kenyan Jairus Birech taking second in 8:08.28.

Erik Kynard’s second-attempt clearance at 2.33m was enough to win what was otherwise a slightly lacklustre high jump contest. An ostensibly classy field generally under-performed, apart from the Olympic silver medallist and China’s world silver medallist Zhang Guowei, who went over 2.31m but could go no higher and finished second.

Among the men who would have been expected to go higher, world champion Derek Drouin finished down in fifth with 2.29m while local hero Mutaz Essa Barshim looked well below his best and only negotiated 2.26m to finish eighth.

In the middle-distance events, there was a confident and comfortable win for South Africa’s Caster Semenya in the 800m, hitting the front with 50 metres to go before winning in a world-leading 1:58.26.

Kenya’s Asbel Kiprop looked equally dominant in the 1500m, holding a 20-metre lead at the bell and being enough in command to wave to the crowd with 50 metres to go and start to ease down before taking all 10 Diamond Race points in 3:32:15.

In a repetition of the gold and silver medal placings at the IAAF World Championships Beijing 2015, Kiprop’s compatriot Elijah Manangoi took second place in 3:33:67.

In the women’s javelin, South Africa’s Sunette Viljoen proved to be almost two metres better than the rest of the field and won with her opening effort of 65.14m, going on to have three more throws better than anyone else.

Phil Minshull for the IAAF`