Olympic bronze medallist Sam Kendricks soared to a meeting record of 5.92m in the pole vault to produce the main field event highlight at Lausanne’s Athletissima meeting, the 11th stop in the 2016 IAAF Diamond League, on Thursday (25).

The 23-year-old US champion rose to the occasion to produce one of the finest competitions of his career.

With the victory sealed after his flawless vaulting through to 5.80m, Kendricks went on to clear 5.92m on his second try to equal his career best and add one centimetre to the meeting record set by his compatriot Brad Walker nine years ago before calling it a night.

“With the pressure off of us after Rio, all of us came here to jump well and enjoy ourselves,” said Kendricks.

Renaud Lavillenie and Piotr Lisek of Poland each topped out at what normally would be a modest 5.72m, with France’s world record-holder getting the nod on countback.

Mutaz Essa Barshim, the Olympic silver medallist, was equally inspired in the high jump, clearing 2.35m with his final attempt to beat a solid field that was only missing Olympic champion Derek Drouin. He then retired with the competition won.

In the women’s triple jump, Olympic champion Caterine Ibarguen took control in the fourth round with a 14.70m leap before improving to 14.76m with her last attempt to add to her insurmountable lead in the Diamond Race.

Kazakhstan’s Olga Rypakova, the Olympic bronze medallist, was closest to the Colombian, reaching 14.53m in the final round to finish second.

The same fate didn't await Tianna Bartoletta in the long jump, where the recently-minted Olympic champion managed a best of just 6.46m to finish a distant fifth.

With 46 points, Spanovic too is unbeatable in the Diamond Race provided she competes in the final of her discipline in Zurich.

Milanov bounces back after Rio disappointment

The meeting opened with Philip Milanov’s victory in the discus, his first IAAF Diamond League triumph of the season.

The 25-year-old Belgian record-holder, who was a disappointing ninth at the Olympic Games 12 days ago after taking the silver medal at the IAAF World Championships Beijing 2015, controlled the competition from the second round, when he threw 65.47m.

He improved to 65.61m in the final round to win by nearly a metre over Austria’s Lukas Weisshaidinger whose 64.84m best also came in round six.

Latvia’s Madara Palameika solidified her Diamond Race lead in the javelin with a final-round 65.29m effort to steal the victory from world record-holder Barbora Spotakova.

The Czech thrower, aiming for a fourth victory at this meeting, reached 64.84m in the fifth round to move up into the lead from fifth position before being supplanted by Palameika, whose victory here was at least in part some consolation after a modest 10th-place finish in Rio.

“After the disappointment in Rio, I am very emotional after winning here today,” said the 29-year-old, who came up just shy of her 65.68m season's best. “Winning the Diamond Race will be some sort of compensation for the loss in Rio.”

Tatsiana Khaladovich of Belarus, the European champion and winner in Monaco, was third with 64.15m.

In the women’s shot put, New Zealand’s Valerie Adams all but clinched her fifth Diamond Trophy after claiming her fourth 2016 series win.

The Olympic silver medallist took command with a 19.83m second-round effort before improving to 19.94m with her final put.

Olympic champion Michelle Carter, who surprised Adams with a US record in the final round in Rio to snatch the gold medal, couldn't produce such heroics in Lausanne but came closest to her regular rival, reaching 19.49m in round three.

Germany’s Christina Schwanitz, the world and European champion, was third at 19.33m. 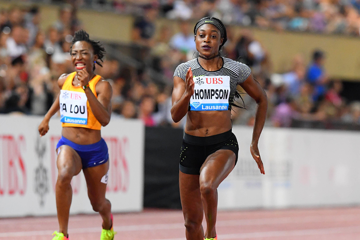 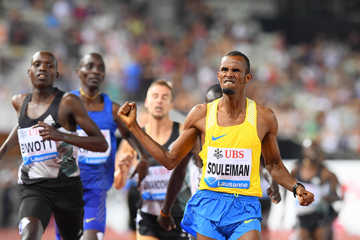