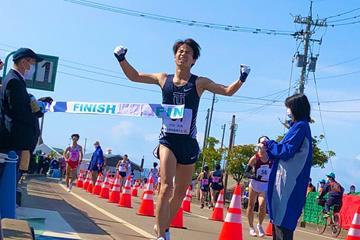 Koki Ikeda is all but guaranteed an Olympic 20km place after the Japanese went for broke over the final 500 metres of a race that only survived when it changed its name.

It was originally billed as the 14th Asian Championships - but Coronavirus put paid to that.

Instead, it became just the 44th All Japan race, and not many athletics events have demanded entrants pack their kit bags with medical masks. Practically every official, judge and spectator was anonymous behind them.

But that was considered the drastic need in Nomi after organisers made it a homegrown-only field. The Japan Athletics Federation even stripped the day of junior support races.

Missed as the rest of Asia might be, the overall race winner has seen a Japanese break the tape in all but one of the last six editions.

The elephant in the room was the absent Toshikazu Yamanishi - but that’s because the bespectacled world champion has no need of an extra race. He’s already covered himself in glory for two of the three qualifiers that count towards Olympic selection. His win in Doha, and another first by nearly two minutes in Kobe last month meant teammates were bidding for the remaining two places.

Seven, including Ikeda and world record holder Yusuke Suzuki, immediately shot to the front on a sunny, chilly morning, with all under four minutes for the first 1km loop.

They were still together - just - at 3kms in 11:53 with the merest attempt by Suzuki to split the group during the circuit.

In fact, it was only another 100 metres before they lapped the first of many around the course in front of the Negami General Cultural Centre.

There was a notable injection of pace over the fifth circuit with everyone back together, and around 10 seconds quicker than the one before it.

It put paid to Fumitaka Oikawa and Yutaro Murayama - both living outside their comfort zone at this level.

And by halfway in 39:21, it was clear which five were going to feature over the next few circuits.

The speed increased by around three seconds a lap, and was to get faster. With eight to go it was too much for Isamu Fujisawa, who walked 1:17:52 in Nomi last year.

The rest inched under 59 minutes at the three-quarter mark, with Suzuki clearly testing the group. Sometimes the World champion 50km winner was at the back; sometimes at the front.

But a visit to the water station on lap 17 all but stopped him in his tracks.

He desperately tried to latch on to the other four after a gulped drink, and dropped away quickly, soon to be joined by Yuta Koga, a surprise candidate at this stage of the race.

Ahead, there was maybe a metre between the front two when the bell sounded, but Ikeda, bronze medallist at Nomi last year and winner at the Team Championships in 2018, quickened his stride, pumped his arms, and went for the line.

At the last turn, dogged chaser Eiki Takahashi wearing sunglasses, knew he would have to settle for second as the leader sprinted the last 200 metres.

But the four-time winner of the race in Kobe, and with a personal best 1:17:26 from 2018, has surely nailed down a place behind Yamanishi and Ikeda when the Olympic team is announced on 2 July.

Ikeda’s PB from Nomi, 12 months ago is but a second better than Takahashi’s, but that’s more or less all he needed.

In the women's race, Nanako Fujii followed up a breakthrough 1:28:58 from La Coruña last year to walk away from her last challenger at 18kms to also claim an Olympic berth.

The walker, not 21 until June, waited until only Masumi Fuchise was alongside, and then in turn, shed her gloves, cap and last opponent.

Fuji was seventh at the World Championships in Doha, and has clearly grown in confidence over the last 12 months.

A pedestrian 4:54 completed the first loop; it was much the same for the leading group of 13 at 3km, and just as steady two laps later.

But by 7km, the group was getting into gear and the leaders were pared to eight. One more round saw Al Michiguchi starting to slip back through the field.

There were only four at halfway (47:46) with Serena Sonoda just out of reach, and Nami Hayashi a victim on the previous circuit.

On debut, Minori Yabuta suggested she will make the leap from junior races to 20km in the future. She was only 18 last month, and her personal best for half the distance was a modest 47:10 from 2018.

But by 13km, she too was feeling the increased pace as Fuji, Fuchise and Kaori Kawazoe moved away.

The trio looked tied to a short piece of string until Fuchise went to the front for the first time at 15km.

Then it was over for Kawazoe, second in Nomi last year, and with 1:31:10 under her belt from Kobe last month.

She was untied double-quick as the two leaders went through the gears.

With her curious leaning style and head to one side, Fuchise at 33, and Asian champion as far back as 2010, looked as she would be the one to beat.

Fuji had other ideas, and slowly, slowly over lap 18 created the decisive gap.