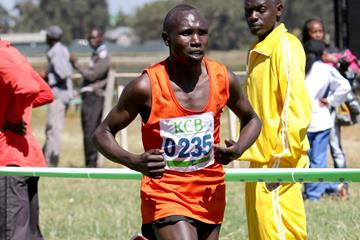 World cross-country champion Geoffrey Kamworor defeated a stellar field to win his fourth title in succession at the Kenya Police Cross Country Championships, staged at the Ngong Racecourse in Nairobi, on Saturday (16).

Such was the calibre of the men’s 10km race, there was no space inside the top 10 for renowned athletes such as two-time Amsterdam Marathon winner Bernard Kipyego, who finished 11th, while well-known track exponents Isiah Koech and Nixon Chepseba finished even further back.

Competing for the first time since finishing second in the New York Marathon last November, Kamworor pushed the proceedings from the gun in his trademark fashion.

Asbel Kiprop stuck with Kamworor until just beyond the halfway point but the leader’s pace proved too much for the three-time world 1500m champion, who began to drift back just after the six kilometre mark.

Kamworor ploughed on to win unopposed at his traditional yearly opening race in 30:53. Augustine Choge reeled in Kiprop in the closing stages of the race to claim a distant second in 31:30 with the flagging Kiprop third in 31:47.

Fresh from his best year to date in which he claimed the world cross-country title in Guiyang and a silver medal over 10,000m at this summer's IAAF World Championships, Kamworor outlined to local reporters that his main aims this year are the IAAF World Half Marathon Championships Cardiff 2016, where he will also line up as the reigning champion, and the 10,000m at the Rio 2016 Olympic Games.

For Choge, this race marked a return to form for the 28-year-old, who had a forgettable 2015 season.

“I had a frustrating 2015 due to injury, but it feels great to be back and run my first race here and finish second. I’m hoping for injury-free season and a slot on the Olympic team,” said the former world youth and junior champion.

Other noteworthy names inside the top 10 included Caleb Ndiku in sixth place (32:00), Peter Kirui in seventh (32:05) and steeplechaser Paul Kipsiele Koech in ninth (32:18).

The women’s race provided a much closer affair with world 10,000m champion and 2011 world cross-country champion Vivian Cheruiyot relying on her famed sprint finish to hold off Margaret Kipkemboi, who was 13th at the IAAF World Cross Country Championships Guiyang 2015.

Cheruiyot and Chelimo shared an identical time of 36:30, with world 3000m steeplechase champion Hyvin Kiyeng rounding out the top three, the latter coming home four seconds behind the leading pair.

“I was here to represent my DCI [Directorate of Criminal Investigation] team and it wasn’t bad considering that I’m not in good shape, but I will not be running any more cross-country races; I’m going straight to start preparing for track season,” said Cheruiyot.