As advertised beforehand, the 62nd Beppu-Oita Marathon turned into a thrilling battle between Yuki Kawauchi and Kentaro Nakamoto, with the pair engaged in a head-to-head over the second half of the race on Sunday (3).

Kawauchi, the fastest non-professional Marathon runner in Japan, surged at 28km, 33.3km, 36.4m and finally at 36.9km only to have Nakamoto, sixth in the London 2012 Olympics Games, covered his move.

With 1.6km to go, Kawauchi surged for the one final time and finally shook off his rival, going on to win in a  course record and personal best of 2:08:15.

Nakamoto finished 20 seconds behind Kawauchi in second place with 2:08:35, which was also a personal best but, frustratingly, he is still yet to win a Marathon in his 10 outings.

Japanese runners occupied the first five places with the first runner from overseas being Australia’s Michael Shelley in sixth with 2:13:12.

“I was hurting but I did not want to run a slow tactical race.  I fell little short of my goal of 2:07, but I am happy to run faster than Hiroyuki Horibata’s  time in Fukuoka (2:08:24).  After 21 Marathon runs, I can now say with confidence how fun Marathon running can be,” said Kawauch, noting that the Beppu-Oita Marathon was one of the qualifying races for the Japanese team going to the 2013 IAAF World Championships,

In contrast to the delight of the winner, Nakamoto was visibly disappointed. “I knew it would come down to the final part of the race, so I tried to be ready for the one final surge. My plan was to push the pace long way from the finish but I just could not shake Kawauchi off.  I am happy with my time but my goal was to win this race, so I am disappointed about that.”

Seven runners passed 25km together in 1:16:01 with only Eritrea’s Tewelde Estifanos and Morocco’s Abdelkrim Boubker among the invited runners from abroad in the leading group.

At 28km, the cat-and-mouse battle between the two main protagonists began. Kawauchi surged and Nakamoto was the only runner to follow him. At 30.5km, Kawauchi moved to front to take his drink but Nakamoto decided to miss his drink and found himself briefly in the lead.

With 1.6km to go, after taking water for a final time, Kawauchi made one final surge and quickly opened up a 10 metres gap, suggesting that Nakamoto’s will had been broken. The gap gradually grew until Kawauchi crossed the line 20 seconds in front of his tenacious rival, having run the second half of the race only one second slower than the first half. 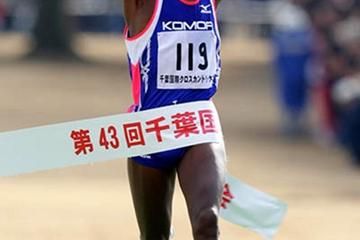 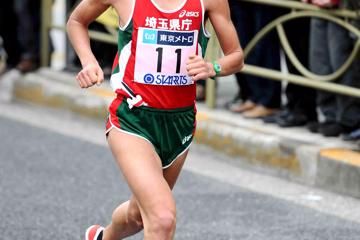