Young runners dominated the Kenya's Trials for the World Cross Country Championships in Ruiru on Saturday (10) with all but one of the titles going to athletes under the age of 20.

The event, held at the Kenya Prison’s Training College, was held earlier than usual to allow extra time to process the necessary travel documents for the global event, which is due to be held on 18 February.

Given the usual high standard of this event, it was expected that all the titles would go to Kenya’s established stars. But in the senior women’s 10km event, the relatively unknown Grace Loibach produced a dominant run to defeat a strong and experienced field.

Loibach, Olympic semifinalist Edinah Jepitok and 2017 world cross-country champion Irene Cheptai broke away from the leading pack with about two kilometres to go. Cheptai was the first of those to lose ground, leaving Jebitok to battle with Loibach, who turned 19 just last month.

Loibach had conserved enough energy to open up a comfortable gap over Jebitok in the final 500 metres, breaking away to win by five seconds in 32:33. Cheptai held on for third, albeit 31 seconds behind the winner.

Kenyan has won the senior women’s title at the past seven editions of the World Cross Country Championships. Despite her inexperience, Loibach now wants to add her name to that roll call, but Cheptai also has an eye on regaining gold.

“My plan is to go and represent Kenya well in Australia and win gold,” said Loibach, who has improved notably since finishing 10th in the 3000m at Kenya’s trials for the 2021 World U20 Championships.

“The race was hot,” said Cheptai. “My body wasn’t in the best form, but I am glad I made the team. God willing, I want to regain my world cross-country Championship title.”

The senior men’s 10km – the only race not won by a teenager – followed a similar script until the last four kilometres when, as though to test the waters, Commonwealth silver medallist Daniel Ebenyo sprang ahead of the leading pack momentarily roughly 20 minutes into the race. The world 5000m finalist then slowed down, and a group of almost six runners regrouped before he made another decisive surge that only Sebastian Kimaru Sawe could keep up with.

Kimaru, who won the one-hour race at the Wanda Diamond League meeting in Brussels in September and more recently won the Iten Cross Country event a week ago, closed the gap on Ebenyo in the last few hundred meters to win the race in 28:23. Ebenyo was second in 28:29 while former world half marathon record-holder Kibiwott Kandie finished third in 28:31.

Two-time world cross-country champion Geoffrey Kamworor, who is returning from a stress fracture, also made it on to the team after finishing sixth. “Making the team is really great for me after only three months of training,” Kamworor said. “We still have a good length of time to train ahead of the World Cross Country Championships, and I believe I will be in perfect form when the time comes.”

Unlike previous editions, this year’s trials were invitational and based on results that runners had achieved in recent Athletics Kenya cross country events. Consequently, there were no team colours or flags crisscrossing the field as is often the case at the Kenyan Cross Country Championships.

Both of the senior 2km races, held mainly to select the team for the relay event in Bathurst, were won by 18-year-olds.

In a race where steeplechase world record-holder Beatrice Chepkoech finished third, 18-year-old Brenda Chebet won the women’s event in 6:05, followed by Miriam Cherop (6:08) and Chepkoech (6:12), a training partner of Cherop.

Chebet, the world U20 1500m silver medallist, now has her eyes on senior success next year.

“I feel so happy today,” said Wanyonyi, who had edged Abel Kipsang to win in Iten last week. “I didn’t expect to win. I have been training hard, expecting tough competition. I’ll continue training hard.”

The U20 women’s 6km field was already a single file within the first kilometre as world U20 steeplechase champion Faith Cherotich led the race from gun to tape. In what proved to be the most convincing victory of the day, Cherotich won by 17 seconds in 19:16 ahead of Sheila Chebet (19:33) and Joyline Chepkemoi (19:36).

“I still need to work on my long runs a little ahead of the World Cross Country championships,” said Cherotich.

In contrast to the U20 women’s race, a large lead pack ran together for the first kilometre of the U20 men’s event. A group of five broke away in the last half of the race, and soon just two remained: Ismael Kirui and Raynold Kipkorir. 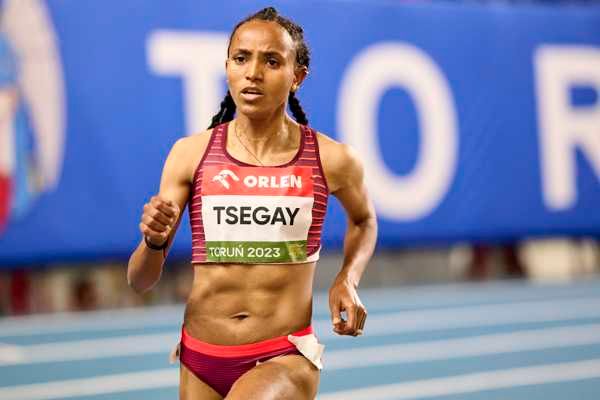 Tsegay triumphs with No.2 all-time indoor mile in Torun