The Kenyan team dominated the 6th IAAF/VSZ World Half Marathon Championships. This spectacular race was fought out every stride of the way and finally won by Shem Kororia with a final sprint worthy of a 5000m specialist.

The final time - 59.56 - is a new world championships record and the second fastest all time over 21.097km: just 9 seconds behind the best performance set by Moses Tanui in Milan on 3 April 1993.

Moses Tanui laid down the rules of engagement from the sixth kilometre, but in the end he succumbed to the stronger kick of his 25 year old compatriot at the very finish of the race. Proof of this is in his own time: 59:58, his second best ever and the fourth fastest of all time.

This was, overall, the fastest half marathon in history: never have so many men crossed the finish line so close to the 60 minute mark as in Kosice today. Third placed Kenyan Kenneth Cheruiyot, crossed the line in exactly 60:00.

The standard of the race was excellent and this was largely due to the Kenyans, but also to their opponents: South Africans, Belgian, Ethiopian, Portuguese and Italian. Stefano Baldini, who was defending the world champion's title he won in Palma de Mallorca last year, ran 16 seconds faster than his time last year, but this was only enough to give him ninth place.

The Kenyan progression was astounding: at the 5km mark, the leaders - headed by Abel Chimukoko (ZIM) - passed in 14:28, but by bthe sixth kilometre, a group led by Moses Tanui had broken away from the field.

The acceleration was evident, with the second five kilometres falling in 14:11 (28:39 the aggregate) and the third in 14:10 (42:49 the total elapsed time at the 15km mark). At that point, the leaders were Ramaala (RSA), Thys (RSA), Cheruiyot (KEN), Tanui (KEN) and Kororia (KEN) and little was to change in this order right up to the final sprint. The only real change was provoked by the magnificent recovery of the Belgian Mohammed Mourhit Mourhit made a magnificent run and caught up with the leaders just before the 20 km mark (57:03).

From that point, the endurance race became a sprint. Moses Tanui accelerated, hoping to soften the sprint of Shem Kororia. Gert Thys was lost in the acceleration. Mourhit resisted, but not for long, he raised the white flag 200 metres from the finish, his reserves drained dry.

Ramaala, with the resistance of a great marathon runner hung in there, but he just did not have the speed to counter runners like Kororia and Tanui.

Moses Tanui, 10,000m world champion in Tokyo in 1991, lost five metres, enough to give Kororia the victory and the $40,000 winner's purse. Cheruiyot then took third place for Kenya, giving the country the team victory too, ahead of South Africa, Ethiopia, Spain and Italy. 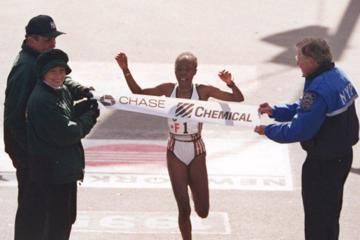