Kenya's Tegla Loroupe was the happy winner of the women's race at the IAAF/VSZ World Half Marathon Championships.

Loroupe seemed virtually assured of victory when Elana Meyer fell out of the running at the 11th kilometre. Up to the 10km mark (32:12), the pair had been running closely together, then Loroupe pulled away strongly and the battle was over.

With Meyer disposed of, Loroupe had all her leisure to admire the scenery and enjoy the near perfect conditions: sunshine and 14.5°C. With an attractive course, running through the many parks of Kosice and past some of the city's most attractive buildings, Loroupe looked as though she was enjoying the sights, as she frequently looked around and seemed to have a continual beam on her face.

She may have seen some interesting sights on her travels around the world, where she has run in marathons and half marathons on every continent and in many capital cities - New York to Berlin, Tokyo to Lisbon, from Boston to Cologne - but the multi-cultural history reflected in Kosice's architecture, with its influences from Slovak tradition, but also the cultures of Austria, Germany and, mainly Hungary - seemed to hold a special appeal, even when the perspiration started to run down her cheeks.

Behind Tegla - a few hundred metres behind - the Romanians had encircled Joyce Chempchumba and Delilah Asiago, the other Kenyans, in an attempt to intimidate them. In fact, the only battle left to be fought was for the team prize.

The defending Romanian team were prepared to show their mettle to the Kenyans, who were fielding a team for the first time in the event. Here the battle was closely fought: Cristina Pomacu, Lidia Simon and Nuta Olaru controlling Chempchumba and Asiago liike well-trained sheep dogs with their flock. Then Pomacu made her break, escaping from the threat of Chempchumba and Asiago.

At the 15km mark - 48:17 Loroupe, 48:40 Pomacu - the only doubt was who would win the team prize: Romania or Kenya? And this is where the team spirit came to play and reinforce the technical quality of the Romanians.

It is no mean feat to put together a team of five runners of the highest level and have all five finish in the first 15 of an event of this level, ensuring victory in the team event. Africa is the source of great athletic talent, but the talent has to be found, trained and moulded.

But Loroupe is a special talent. As special as her race in Kosice, the fastest ever run in a world championships: 1:08:14. The fastest, and the finest, because the Kenyan's style is a masterful combination of elegance and economy. Tegla was born to run: she is slight but has long legs, which make her look like a giant when she runs. 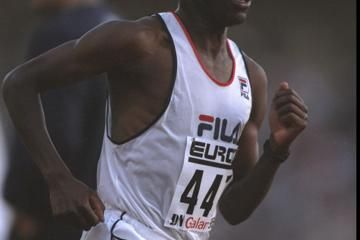