Hamish Kerr equalled the national high jump record of 19 years standing, Edward Osei-Nketia and Zoe Hobbs completed a 100m sprint double and Kelsey-Lee Barber smashed her personal best in the javelin as Australia and New Zealand battled for supremacy on the second day of the Oceania Championships in Townsville.

The day – evening? night? – culminated with a massive battle between teammates and training partners Cedric Dubler and Ashley Moloney in the decathlon. A pivotal pole vault battle ended with both clearing five metres, a 40-centimetre personal best for Moloney. A programme scheduled to finish a little after 7pm stretched out for two more drama-filled hours.

Once the extended battle of the decathlon ended, Australia had six gold medals for the day, New Zealand three. The hosts had Barber in the javelin, Matthew Ramsden and Georgia Griffith in the 1500s, Ashley Moloney in the decathlon, Henry Smith in the long jump, and the quartet comprised of Rebecca Bennet, Ellie Beer, Tom Willems and Ian Halpin in the mixed 4x400m relay against Kerr, Osei-Nketia and Hobbs.

Kerr upsets Starc in the Aussie’s own backyard

When Brandon Starc won the high jump at last year’s Commonwealth Games he said how much he loved competing in front of an Australian crowd. He subsequently equalled Tim Forsyth’s national record of 2.36m in Eberstadt and won the Diamond trophy in Brussels.

Forsyth set the record in 1997, three years before his New Zealand contemporary, Glenn Howard, cleared 2.30m in Christchurch. New Zealand does not have a long tradition of male high jumpers. Kerr was already second on the all-time list with 2.25m. In Townsville, going head-to-head with last year’s Diamond League champion, he equalled Howard’s mark without a miss en route before bowing out at 2.33m.

Nothing much worried Kerr through the competition, which was held adjacent to the drawn-out decathlon pole vault. The vaulters seemed to have trouble with the breeze. Not Kerr, however. “The wind was actually a cross-tail for us, which was pretty good, much better than in New Zealand at the moment.”

Townsville weather is probably much better than almost all of New Zealand almost every day of the year, in fact, but you fancy day two of the championships would always have been a sunny day for Kerr. He came in at a modest 2.05m, and took each of the seven heights to 2.30m first time.

“The whole purpose (of coming here) was to get the Doha qualifier. That’s done, now I just want to get in some more good jumps.” His next competition is the World University Games.

Kelsey-Lee Barber had a good 2018 in the javelin – silver medal in the Commonwealth Games, a personal best 64.57m – but 2019 may be even better. She topped a consistent series of throws with a fifth-round 65.61m. Teammate Mackenzie Little, winner of the past two NCAA titles, finished second with 57.74m.

“Normally I have a few competitions before I put one on the board. I’m very excited.”

Barber is headed to Europe at the end of the week. “Nothing’s locked in. I’m hoping to get into a couple of Diamond Leagues.”

Osei-Nketia and Hobbs king and queen of Oceania

A couple of months ago, Edward Osei-Nketia was eligible to run for both Australia and New Zealand. He had just won the 100m at the Australian titles when he announced he was opting for New Zealand.

Now, he was back winning the Oceania title for his chosen country. Osei-Nketia, just turned 18, dwarfed most of his rivals in the final. He looked to have won as he crossed the line just ahead of young Australian Jake Doran, but there was initially some confusion when it appeared Doran had been declared the winner. With that sorted out, Ose-Nketia leapt the trackside fence to celebrate with his teammates. His 10.34 edged Doran by 0.05.

Minutes later, he was joined as Oceania 100m champion by Zoe Hobbs, who got out fast, blunting Naa Anang’s usual advantage off the blocks, and held the lead all the way to the line to win, 11.56 to 11.67.

Osei-Nketia, who was still in the midst of his post-race interview, summed things up neatly: “It’s a really good feeling for New Zealand being the king and queen of the sprint,” he said.

If one event can epitomise a competition comprising 10 different disciplines, the decathlon pole vault did. World U20 champion Ashley Moloney came into it with a lead of just 68 points over training partner Cedric Dubler. Moloney’s PB was 4.60m, Dubler’s 5.20m.

At the end of it, both men walked away with 5.00m, a result Dubler would have taken at the start but which Moloney could seemingly only dream of. Moloney’s style was one to give his pole vault adviser – six-metre man Paul Burgess – nightmares as he watched on alongside the pair’s coach, Eric Brown. Picture a frog lying on its back and flying through the air and you’ve got something like it.

Dubler looked a lot better, not that it did him much good. He came in confidently at 4.70m, then shook that confidence by requiring all three attempts. Same at 4.90m and again at 5.00m. And there it ended, Moloney still 68 points clear.

On paper, it was still either man’s gold medal, not much between them in the javelin and with Dubler having a substantial edge at 1500m. But a 54.38m throw by Moloney saw him pick up an extra 41 points on Dubler’s 51.66m and when Moloney finished just six seconds behind Dubler in the 1500m, he consolidated the win.

Neither man reached the World Championships qualifier of 8200, but Moloney’s 8103 was an improvement on his senior debut at Gotzis last month while Dubler was again over 8000 with 8031, in an event where few Australians have ever gone beyond that traditional measure of decathlon excellence. 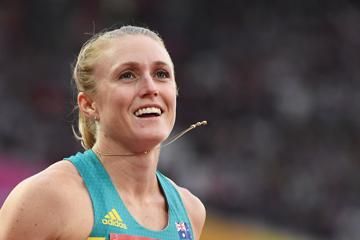 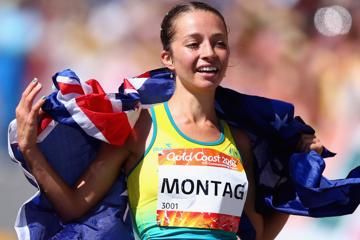