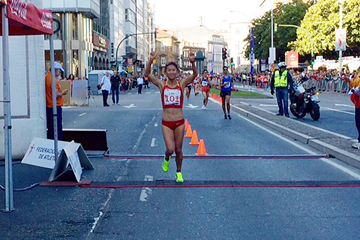 The former recognised world record was 1:25:02, set by Russia’s Yelena Lashmanova when winning at the London 2012 Olympic Games. There had been faster times of 1:24:50 and 1:24:54 by her compatriots Olimpiada Ivanova and Olga Kaniskina that had not been recognised due to not fulfilling world record ratification requirements concerning the number of international judges present.

In almost perfect conditions, close to the sea front of the Atlantic coastal city, Liu covered the first 10 one-kilometre laps in 42:39 before posting a stunning negative split over the second 10km of 41:59.

To give an idea of Liu’s overwhelming dominance today, and her solid walking style meant that she only received one warning, she lapped all her opponents except for her compatriot Qieyang Shenjie, who finished second more than three minutes in arrears despite clocking a personal best of 1:27:44.

Liu against the clock

The Chinese star set out from the gun to not only record a hat-trick of victories at the prestigious La Coruna race, after wins in 2012 and 2014 but also had the goal of a personal best and maybe a world record.

She set a furious pace right from the start, with 4:17 for the opening lap, then slowed down only slightly to 4:20 for the second and 4:21 for her third circuit; but she then injected a brisker pace in the fourth (4:14) and fifth (4:15) laps which she maintained over the following kilometres to reach the 10km point in 42:39.

Liu, perhaps realising that she was a just little outside world record pace and that she would have to speed up if she was to finish inside 1:25, then proceeded to covered several 1km laps between 4:11 and 4:13 to be timed at 1:03:41 at 15km.

Her final lap was 4:05 to reduce the world record by the handsome margin of no less than 24 seconds.

The men’s race produced another win for China and all the talk would have been of Wang Zhen’s victory in an outstanding 1:18:00, with him taking eight seconds off the meeting record, if his thunder had not been stolen by his compatriot Liu.

In a year when the 20km race walk world record has already been broken twice, Wang’s effort in La Coruna might have been in danger of also being overshadowed by the March feats of Yohann Diniz and then Yusuke Diniz but it was still a superb performance.

The visiting Chinese party also took a clean sweep of the men’s medals with Wang, the London 2012 Olympic Games bronze medallist, getting the better of the reigning Olympic champion Chen Ding and also Cai Zelin.

Right from the start the Chinese trio dictated a brisk pace, lapping in the range of 3:53-3:56 and only Japan’s Isamu Fujisawa, Australia’s Dane Bird-Smith and the local star Miguel Ángel Lopez could live with that kind of pace.

Shortly after the sixth kilometre, the in-form Wang managed to break away from the rest of the leading group to go through the halfway point in 39:02 while Chen and Cai were 15 seconds in arrears, and the trio of Fujisawa, Bird-Smith and Lopez reached that point in 39:36

The second half witnessed a solo performance by Wang, who strengthened his advantage every 1km lap to build a final winning margin of 44 seconds over Chen, himself a massive one full minute ahead of Cai.

The fight for the fourth place went for Lopez, who narrowly beat the Bird-Smith and Fujisawa.

Coached by Italian walking guru Sandro Damilano, Wang remains unbeaten so far in 2015 having set a world-leading time of 38:23.73 for the 10,000m event on the track in addition to a 20km effort of 1:19:29 in Beijing to win China’s IAAF World Championships trials.