Breaking from the pace setters in the 13th kilometre, Lemma forged on alone en route to a 2:04:58 run, smashing the 2:08:18 race record set by Ethiopian Limenih Getachew in 2015.

Jepkesho didn't make her move until the 39th kilometre, breaking from compatriot Selly Chepyego to win convincingly in 2:22:58, clipping nearly two-and-a-half minutes from the 2:25:24 women's record set by Caroline Kilel in 2009.

With heavy rain falling in the opening stages, the men's race started on a 2:07 pace but already at the five-kilometre point, reached in 15:06, Lemma appeared impatient. The rains had largely subsided by the 10th kilometre (30:07), with Lemma deciding to make his break from the 15-man lead group less than three kilometres later.

Upping the tempo dramatically, he blazed through 14:35, 14:32 and 14:31 five-kilometre splits to reach 25 kilometres in 1:13:45, nearly a minute and a half clear of his closest pursuer, Ayele Abshero. Five kilometres later he extended his lead to nearly two-and-a-half minutes and by 40 kilometres was ahead by more than three.

The 27-year-old's winning time was the second fastest performance of his career, behind the 2:04:08 lifetime best he ran in Dubai in January where he finished fifth.

“I was thinking about the record from the start but the weather was difficult because of the rain,” said Lemma who was racing in his third marathon of the year. “But it was also a challenge, and challenges give me confidence.”

Gebretsadik Adhana of Ethiopia was a distant second in 2:08:36 with Hiskel Tewelde of Eritrea rounding out the podium in 2:08:49. Further back, Abshero was fourth in 2:09:12.

The women's race was much closer, with six women – accompanied by a pair of male pacesetters – still in contention through the half: Jepkesho, Chepyego, defending champion Shuko Wote and her Ethiopian compatriots Sutume Kedebe and Dibaba Kuma, and Sharon Cherop of Kenya.

Cherop and Wote were the first to fall back, followed by Kebede and Kuma, leaving just the two Kenyans to battle on after 35 kilometres. That score was settled by the 40th kilometre when Jepkesho had only the final pacesetter for company on the course's final lift near the Slovenian capital's central Prešeren Square. Her winning time was the third fastest of her career, trailing her 2:21:37 and 2:22:40 runs in Paris and Istanbul last year.

“The pacesetters were so, so good,” Jepkesho said, beaming through the rain that returned in the race's waning stages. “I’ve never run in rain before but it was good for me to experience it.”

Chepyego hung on for second, clocking 2:23:15 to knock more than three minutes from her previous best. Kuma, making her marathon debut, was third in 2:23:34. Cherop, the veteran of the field, was fourth in 2:25:02.

Olika Adugna and Gete Alemayehu triumphed at the 40th edition of the challenging Marseille-Cassis 20km on Sunday (28), securing the first ever Ethiopian double at the IAAF Silver Label road race in southern France.

As soon as the gun sounded, a group of about 10 runners formed and they went on to reach the five-kilometre mark in 15:22.

At the instigation of Kenya’s Gerald Vincent, the field broke up during the tough 327-metre climb up to the Col de la Gineste. Only the Ethiopian pair Yismaw Ayenu and Olika Adugna were able to go with Vincent’s relentless rhythm. The trio went through the halfway point in 32:25, 12 seconds ahead of Moses Kibet of Uganda and Abera Kuma.

The pack started the first part of the descent towards Cassis as the smog cleared, leaving way to perfect running conditions.

The lead group took advantage of the second downhill section to hurtle towards the waning stages. Kuma managed to draw level with the leaders and the race suddenly became a duel between Kuma and Adugna.

The latter was stronger, covering the last five kilometres in 13:47 to claim his first international success in 1:00:29, one second ahead of his opponent.

The young Ethiopian, who doesn’t speak English, finished fifth in the 10,000m at the IAAF World U20 Championships Tampere 2018.

Having shown great strength throughout, Vincent rounded out the podium in 1:00:33. Hassan Chahdi was the first French finisher, placing eighth in 1:02:14.

In contrast to the men’s race, the women’s contest was less competitive as Ethiopian Gete Alemayehu ran solo for most of the way en route to winning in 1:08:46.

She passed five kilometres in 16:53, 15 seconds ahead of Joyce Chepkemoi. The gap grew to 27 seconds at the top of the col de la Gineste, hit in 36:09 by Alemayehu.

She covered the third five-kilometre section in 15:49 to extend her lead to one minute at 15 kilometres (she was timed in 51:58). The 28-year-old struggled in the closing stages but still crossed the line 50 seconds ahead of Chepkemoi, who held on for second place. Lenah Jerotich finished third in 1:11:50.

Kenya’s Angela Jemesunde Tanui lived up to her pre-event favourite role by taking a gun-to-tape win in 2:31:30 in the women’s race. Sorome Negash from Ethiopia finished a distant second in 2:38:59 ahead of Tanui’s sister Euliter Jepchirchir Tanui (2:40:56).

In the men’s race, pacemakers Philimon Maritim and Jafred Chirchir Kipchumba led an eight-man group that went through five kilometres in 15:19, 10 kilometres in 30:41, 15 kilometres in 46:12 before reaching the half-way point in 1:05:24.

Between 25 and 30 kilometres, the lead group was whittled down from eight to five men: Gebre, Kangogo, Kiptoo, Chumba and Kiplimo. They passed through the 30-kilometre checkpoint in San Giuliano Park in 1:33:32, eight minutes ahead of Boston Marathon winner Yuki Kawauchi.

Kangogo, Gebre and Chumba pushed the pace on the Bridge of Liberty, dropping Kiplimo at 35 kilometres. In this tough section of the course, conditions were made more challenging by the strong head-wind and the race became a tactical affair.

At 38 kilometres Gebre broke away from Kangogo and Chumba and increased his lead to 37 seconds at the 40kilometre mark which he passed in 2:05:45. The Ethiopian, who set a PB of 2:09:00 in Prague in 2017, had to overcome the 14 bridges in the final two kilometres in difficult conditions, made more challenging by high water, rain and a strong headwind.

“It’s a fascinating course, but the conditions were very hard,” said Gebre after winning in 2:13:23. “At 35km I decided to push the pace. The final time is not very good but I am happy with the win.”

“I came to Venice to break my personal best, but the conditions were very tough,” said Tanui, who set a lifetime best of 2:26:31 in Vienna last year. “I want to come back next year with my sister; she wants to beat me.”

BACK
Pages related to this articleAthletes
Sisay LEMMA 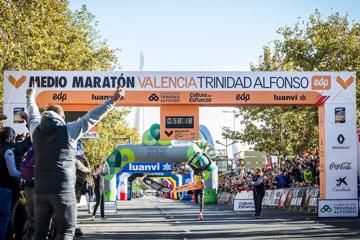 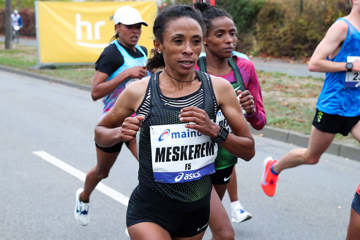