World 400m record holder Wayde van Niekerk flaunted his talent on Saturday (22) to win the South African 200m title, and in-form long jumper Luvo Manyonga broke his own African record, as they produced the highlights of the two-day national championships held in Potchefstroom.

After taking second place behind Olympic finalist Akani Simbine in the 100m contest on Friday's opening day, clocking 10.04 to Simbine's 9.95, Van Niekerk charged to victory in the half-lap final.

He crossed the line in 19.90 after taking his foot off the pedal in the closing stages, narrowly missing the national record of 19.87 held by world championships bronze medallist Anaso Jobodwana and climbing to the top of the 2017 world list.

Van Niekerk said the performance, a personal best by 0.04, had boosted his confidence after confirming he would attempt the 200m and 400m double at the IAAF World Championships London 2017 in August.

"It's such a soothing feeling, and I feel so good knowing I have put down a solid time," he said.

Manyonga, meanwhile, delivered a world lead of 8.65m with his first leap, bettering the continental mark he set in Pretoria last month by three centimetres. In the process, he lifted himself one place up the all-time global rankings, settling in 11th position.

Manyonga revealed he had picked up a groin niggle after his first attempt and sat out the remaining rounds, with African champion Ruswahl Samaai taking the silver medal after launching an impressive 8.49m leap to shatter his personal best.

After making a superb comeback last year by earning the Olympic silver medal, following a lengthy hiatus from the sport, Manyonga believed he had the ability to break the world record of 8.95m held by Mike Powell of the US since 1991.

"The world record is held by a human being. I'm also a human being, so I'm going to push myself to get that nine metres," Manyonga said.

In other events at the national championships, Olympic silver medallist Sunette Viljoen secured her 12th South African title with a season's best of 63.49m in the women's javelin throw.

On the track, Olympic 800m champion Caster Semenya defended her titles in the 400m (51.60) and 800m (2:01.03) contests as she continued her preparation for the upcoming international outdoor season.

With pre-race favourite Carina Horn dropping out of the women's 100m final due to illness, after clocking 11.10 in the semifinals, Olympian Alyssa Conley retained the short sprint titles, taking the 100m in 11.41 and the 200m in 22.94.

Orazio Cremona delivered a 21.12m heave to win the men's shot put, adding 49 centimetres to his personal best, and 43-year-old Chris Harmse extended his impressive record by racking up his 22nd consecutive national title in the men's hammer throw with a 70.53m effort. 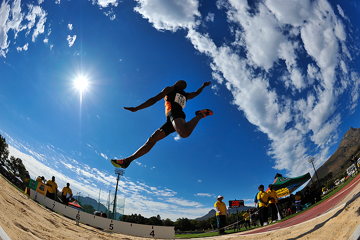