A year after falling apart in Fukuoka, Mathathi makes amends

Last year on his Marathon debut, Mathathi dropped out of the Fukuoka Marathon just after 35km, but this year, on a humid day when the temperatures hovered around 9 degrees Celsius, he showed that he had clearly learned his lesson, as this was the point where he took control of the race.

Taking the lead with 10km to go, Mathathi started to push the pace hard in the final seven kilometres to leave his final challenger and compatriot, 2012 Fukuoka winner Joseph Gitau, having to settle for second place.

Local star Yuki Kawauchi, who was running his 10th Marathon of the year, was third with 2:09:05, giving the crowds plenty to cheer despite the fact that the last Japanese winner of one of the country’s most iconic races over the classic distance was back in 2004, when Tsuyoshi Ogata took the honours.

Kawauchi fell short of improving on his personal best of 2:08:14 but it was his third sub-2:10 Marathon of the year, having ran 2:08:15 in the Beppu-Oita Marathon in February and then 2:08:14 in the Seoul Marathon the following month.

Perhaps more importantly, since he was the first Japanese in the race, at this point Kawauchi is the leading contender to make the Japanese Marathon team for the next year’s Asian Games in the South Korean city of Inchon.

Kawauchi has now brought his career list of sub-2:10 Marathons total to five, one behind the Japanese record of six by Toshinari Takaoka, the national record-holder. He is planning another Marathon, the Hofu Marathon, in two weeks’ time and will be attempting to break the 2:10 barrier twice in two weeks in a bid to equal Takoaka’s ‘record’.

Poland’s Henryk Szost, who was third in last year's race with 2:08:42, was the leading European runner again but finished fourth this year with 2:09:37, the third-fastest time of his career.

He was followed home by Japan’s Chiharu Takada, who improved his personal best from 2:11:53, recorded in this year’s Tokyo Marathon, to 2:10:39, while Canada’s Reid Coolsaet finished sixth in 2:11:24, running his own race and coming through strongly in the final 10km after not being involved with the leaders after 15km into the race.

The leaders, without local hope Arata Fujiwara who dropped out just after 20km, reached the halfway point in 1:03:48 at which point the pacemakers departed.

Immediately afterwards, Kawauchi made a bold move and jumped into the lead.The chasing pack, led by Szost, was suddenly 10 seconds behind. However, Szost caught up with Kawauchi and reeled him in just after 22km.

Just after 28km, the group, minus Sasaki, caught up with Szost and Kawauchi, before Mogusu audaciously led for a couple of kilometres. After 30km, the pack reeled in Mogusu, and two kilometres later Mathathi made his decisive move, accompanied only by Gitau.

Mathathi and Gitau went through 35km in 1:46:13 with a four-man group, led by Mogusu, nine seconds in arrears. Szost and Kawauchi shortly afterwards broke away from their rivals but by 38km Kawauchi had left Szost behind and started to chase Gitau, eventually falling short by five seconds.

As an example of how hard Mathathi worked in the closing stages, the winner covered the stretch between 35km to 40km in 14:39, the second fastest split for this part of the race and only bettered in the long history of the Fukuoka Marathon by the 14:37 clocked by Ethiopia’s Tsegaye Kebede in 2009 en-route to his course record of 2:05:18. 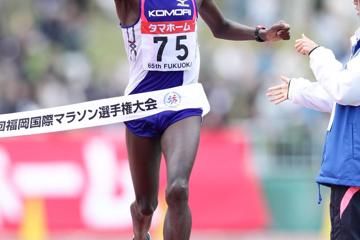 Running in his debut, Ndambiri triumphs in Fu... 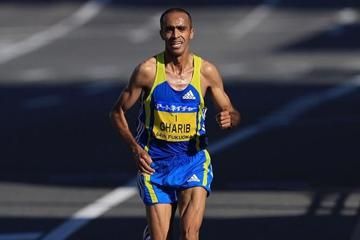 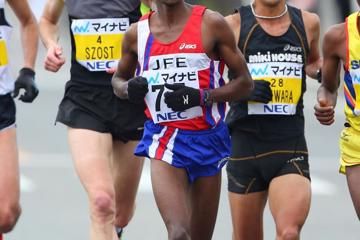