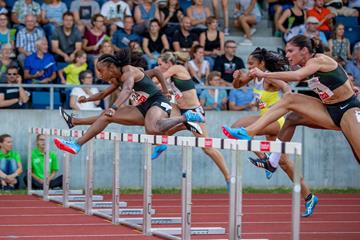 Brianna McNeal’s 12.44 performance in the 100m hurdles was the highlight at the Spitzenleichtathletik meeting in Lucerne on Monday (10).

The reigning Olympic champion has run faster just twice this season, in Stockholm with 12.38 and in Torrance with 12.43. McNeal made her European debut on the track of the Allmend Stadium in Lucerne in 2013 just a few weeks after clocking her 12.26 PB at the US Championships. Her performance also equalled Olga Shishigina’s long-standing meeting record.

“It was a great time,” McNeal said. “I ran a clean race. I was really excited to return to the track where I made my debut in Europe.”

World bronze medallist Pamela Duktiewicz of Germany finished second in 12.67, a season’s best, ahead of Christina Manning of the US who clocked 12.71.

World 60m indoor bronze medallist Mujinga Kambundji followed her fresh Swiss 100m record of 11.03 in Lausanne with a win here in 11.12. In a close race, South African record holder Carina Horn was second in 11.13 and Jenna Prandini of the US third in 11.14. Two-time 100m Olympic champion Shelly Ann Fraser Pryce finished fifth in 11.22 in her first European race since giving birth to her first child Zyon.

Kambundji then finished runner-up in the 200m in a season’s best of 22.48, 0.06 outside of her career best set last year, behind this year’s Commonwealth Games silver medallist Shericka Jackson, who crossed the finish-line in 22.40.

“It means a lot because I never won at this meeting in front of my home fans,” Kambundji said. “My start was better than in Lausanne. I beat Horn and Prandini, who dipped under 11 seconds this year. I can run faster when I am pushed by stronger rivals.”

Looking ahead, Kambundji said she has three more races planned before the European Championships in Berlin next month, the Swiss national championships, Bellinzona and Monaco.

“My goal at the European Championships in Berlin is first to make the final and then try to win a medal. I hope to dip under 11 seconds. It would be great to achieve this goal in Berlin.”

Alonso Edward from Panama, the 2009 world silver medallist, sprinted to an impressive 19.90 in the men’s 200m edging Jamaica’s Akeem Bloomfield, who smashed his PB with 20.00.

Commonwealth champion Janieve Russell won the 400m hurdles in 53.63, her second fastest run of the season, ahead of Olympic champion Dalilah Muhammad and Ashley Spencer of the US, who clocked 53.79 and 54.66, respectively. Further back, Lea Sprunger of Switzerland was fourth in 54.92.

Estonia’s Magnus Kirt notched up the win in the javelin throw with a third round 85.42m to beat Olympic champion Thomas Rohler who reached an 84.25m best. The Estonian thrower had already beaten Rohler earlier this year at the IAAF World Challenge meeting in Turku with 88.73m.

Christin Hussong, a former European U23 champion, won the women’s event with 62.65m ahead of Kara Winger (62.16m). Valerie Adams prevailed in the shot put with 18.67m.

Jamaica’s Natoya Goule launched her sprint in the final straight to win the women’s 800m in 2:00.32. The meeting concluded with Kenyan Caroline Tuigong’s 9:32.61 victory in the 3000m steeplechase.