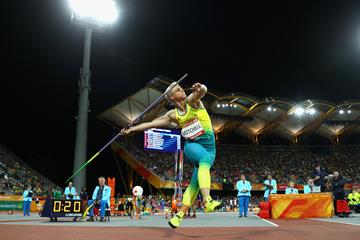 Mitchell’s win in the javelin was assured as early as her first throw, the second of the competition. She produced a 68.92m effort which no-one else, other than her, approached in the remaining 46 attempts.

Praught produced her stunner late, catching world U20 record holder Celliphine Chespol off the final hurdle of the 3000m steeplechase to take a shock victory in 9:21.00. It’s one thing for Kenya to lose a Commonwealth distance title to Uganda, but a Jamaican winning the steeplechase – it is indeed a changing world.

Mitchell, who turns 36 in July, has been waiting a long time to collect an international gold medal. Two Olympic finals have brought a ninth in London and a sixth in Rio; three world championships a fifth, a seventh and a disastrous twenty-fifth in London last year.

But it is at Commonwealth level she has both got closest and endured the most frustration. Sixth in Melbourne in 2006, fifth in Delhi in 2010, Mitchell was in the bronze medal position in the last round in Glasgow four years ago until teammate Kelsey-Lee Roberts snuck past.

Roberts was up to her last-round tricks again at Carrara Stadium, but this time it was a 63.89m effort to take the silver medal from South Africa’s Sunette Viljoen who reached 62.08m.

Other than that, all the numbers were with the winner. Mitchell’s 68.92m ranks her seventh all-time in the world and added a centimetre to the all-comers’ record set by Trine Hattestad at the Sydney 2000 Olympics.

Mitchell threw 68.12m on her fifth attempt before dissolving into tears of joy on her last. She ran on through the foul line and up to the point where her winning throw had landed. A long wait had come to an end.

Aisha Praught is of mixed Jamaican-American heritage and used a little of both, plus some good coaching, to pull off her victory in the steeplechase. Her Jamaican father and American mother split up when she was born. She was raised in the USA, attending college there and finding her way to the Oregon Track Club where she was coached by Mark Rowland until last year (she is now based in Boulder).

The US training and experience, the coaching from an Olympic steeple bronze medallist in Rowland, and the Jamaican sprint genes all came together as she closed down Chespol’s 30-metre lead and then sprinted past to a famous win. Defending champion Purity Kirui finished third.

Praught has represented Jamaica in major championships for several years now, but she told Race Results Weekly in 2015 she felt like “a novelty” at first.

Not any more, you would think.

World champion Luvo Manyonga continued South Africa’s run of success with a win in a high-class long jump competition, while Brandon Starc gave Australia a second gold medal on the night with a win and personal best in the high jump.

Until Manyonga, the London 2017 world champion, produced an 8.41m final jump the difference was a matter of centimetres.

Australia’s Henry Frayne took the lead with an 8.33m second round effort which led at the half-way point. Then Manyonga went 8.35 in the fourth round, going past the Australian by two centimetres and the Games’ record Frayne had set in qualifying by one centimetre. It stayed that way until Manyonga’s final jump, another Games record, to which Frayne responded with a last-round foul.

Ruswahl Samaai had a best jump of 8.22m to give South Africa the bronze medal as well.

A first-time clearance for Starc at 2.32m, a personal best by a centimetre, was enough to give him the gold medal. Jamal Wilson of the Bahamas had led at 2.30m, but when he missed twice at 2.32m he took one unsuccessful attempt at 2.34m, as did bronze medallist Django Lovett of Canada.

Amantle Montsho won the women’s 400 in 50.15, just 0.05 outside her Games record from Delhi eight years ago. Jamaican pair Anastasia Le-Roy and Stephenie McPherson took the minor medals but the race was almost stolen by Kenya’s Maximila Imali, who led into the straight and only dropped out of the medals in the final metres.

Botswana thus took both men’s and women’s 400m titles at the same Games, the first time this has happened in Commonwealth history.

Canada’s Aaron Brown and Jamaica’ Shericka Jackson were fastest in the semi-final round of the men’s and women’s 200m, but the top half of both finals is filled with potential winners.