Stephen Mokoka and Tigist Tufa fulfilled predictions and took down the course records at the 19th Shanghai International Marathon, the pair running 2:08:43 and 2:21:52 respectively at the IAAF Gold Label Road Race on Sunday (2).

Into the bargain, Mokoka emerged as only the second man in the history of this race able to defend his title.

The race started 7am local time with drizzle falling but, with the skies clearing before the half way, the 29-year-old South African was able to use his renowned track speed – he was the 2013 World University Games 10,000m champion – to power away from Ethiopia’s Abreham Cherkos and Kenya’s Stephen Chemlany in the final kilometres.

In his first marathon of 2014, Mokoka took 18 seconds off the course record, having been held by Kenya’s Sylvester Teimet at 2:09:01 since 2012, after he finished a tantalising 29 seconds short of the mark when winning 12 months ago.

Mokoka seems to have a special affection for the Chinese city. He got his debut win over the classic distance a year ago and this was his seventh marathon, but four of them have been in Shanghai, where he also placed second in 2011 and fourth in 2012.

Close behind, the 2008 world junior 5000m champion Cherkos was second in 2:08:47. If it wasn’t his fastest marathon, it was the 25-year-old’s best result, his best previous finish being fourth in Amsterdam in 2010.

Chemlany, who had the fastest season’s best in the field with 2:06:24 from Seoul earlier in the year, which was also his personal best, was third in 2:08:56. The 32-year-old Kenyan has had a relatively busy year and completed his third marathon of the season, having also placed second at the Commonwealth Games marathon in Glasgow in July.

In the women’s race, 27-year-old Tigist Tufa continued her impressive progress during this season.

The Ethiopian crushed the previous course record of 2:23:07, set by her countrywoman Feyse Tadese in 2012, by more than a minute when finishing in a 2:21:52 personal best and actually came home 10th overall.

Tufa, who became the fifth successive Ethiopian winner in this race, has lowered her PB by a huge 19 minutes in just 20 months. Her personal best was just 2:40:45 early in 2013, which she ran in Jacksonville, Florida, in February 2013.

She then made a huge leap in New York 12 months ago clocking 2:29:24, before cutting almost eight minutes from her best in 2014.

Tufa started her marathon season with a 2:28:04 second-place finish in Santa Monica in March and then won the Ottawa Marathon in May in 2:24:31 but all that was a prelude to her feat on Sunday.

Like her compatriot Chemlany, the 33-year-old Kilel took the silver medal at the Commonwealth Games in July.

The next five places in the race all went to Ethiopian runners, with 28-year-old Misiker Mekonnin taking the last spot on the podium in third place with 2:29:03.

The marathon, introduced in 1996, has been previously run in early December but the organisers decided to move the race forward by a month to let the runners enjoy a cleaner climate, as the air traditionally becomes more polluted in December. 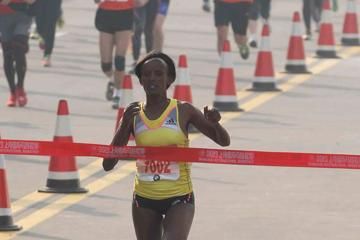 Mokoka and Kebede close to course records in ...