World and Olympic 400m champion Wayde van Niekerk was pushed to the line by Botswana’s Isaac Makwala before earning victory in a meeting record of 43.73 in Monaco on Friday (21) at the final IAAF Diamond League meeting before next month’s IAAF World Championships London 2017.

The 24-year-old South African had said at the previous day’s press conference that he had held a little back in clocking 43.62 at last week’s IAAF Diamond League meeting in Lausanne, where he ran his first 400m since setting the world record of 43.03 in the 2016 Olympic final.

But Botswana’s Makwala – who completed a remarkable in Madrid last Friday in becoming the first man to run a sub-44-second 400m (43.92) and a sub-20-second 200m (19.77) on the same day – gave ample evidence that the challenge for this year’s world title will be fierce.

Van Niekerk, running in lane five with Makwala perfectly in his sights one lane further ahead, had made a big point by passing the Motswana athlete by the halfway point of the backstraight. But Makwala dug in, and as the two men rounded the final bend the victory was far from certain, with Makwala eventually second in a season’s best of 43.84 ahead of compatriot Baboloki Thebe, who clocked 44.26.

“This race felt good from start to finish,” said Makwala. “I have now decided I will be doubling at 200m and 400m in London.”

Monaco witnessed Olympic and world 800m champion Caster Semenya in new circumstances last night, pushed to the line by not one but two runners in the final straight and responding with time of 1:55.27 – a South African record, an IAAF Diamond League record, a meeting record and, as you might expect, the fastest time run this year.

At one thrilling point at the start of the final straight it seemed as if Francine Niyonsaba, the Burundi athlete who took silver behind Semenya’s gold in Rio, might finally get the better of her. And as the blue-vested figure of US runner Ajee Wilson moved up on the outside, even more unusual possibilities opened up.

The champion responded as champions should, but her challengers also had their rewards. Niyonsaba punched the air as her time of 1:55.47 – a national record – came up. Wilson also earned a national record, 1:55.61, as did world silver medallist Melissa Bishop, who ran 1:57.01 to take fifth place behind Sifan Hassan of the Netherlands, whose 1:56.81 was a personal best.

Seven women finished within two minutes, as Britain’s Lynsey Sharp and Brenda Martinez of the United States clocked respective season’s bests of 1:58.01 and 1:58.43.

“I showed my strength,” said Semenya. “It was a hard fight until the end. The girls surprised me how well they ran. Now we still must decide, maybe tonight, what I will do in London – if it will be only the 800m or also 400m or 1500m.”

So – everybody happy ahead of the World Championships. Other than Kenya’s Olympic bronze medallist Margaret Wambui, who faded to ninth in 2:02.13.

The men’s 1500m provided drama also, if on a slightly lesser scale as Elijah Manangoi took over the lead from fellow Kenyan Timothy Cheruiyot in the final 50 metres, and then took over his place at the top of this year’s world list with a winning time of 3:28.80.

Again, testament to the class of the race was provided by the figures further down, as Britain’s Chris O’Hare set a personal best of 3:33.61 in seventh place, and Poland’s Marcin Lewandowski set a national record of 3:34.04 one position behind him.

“My only goal in London will be gold,” said Manangoi, the world silver medallist. “So I am going for it; slow or fast, I do not care!”

Marie-Josee Ta Lou of the Ivory Coast won the women’s 200m in 22.25, taking full advantage of the absence of Olympic 400m champion Shaunae Miller-Uibo, who earlier this year clocked a PB of 21.91 but decided against travelling to compete because she was suffering from tightness in the hips.

Kenya’s Olympic 5000m silver medallist Hellen Obiri offered another statement of intent in the 3000m as she drove for home three laps out, eventually winning in the fastest time seen so far this year, 8:23.14.

As in the women’s 800m, the quality of the contest was felt all the way through the field as nine women who followed Obiri home set personal bests, with ninth-placed Meraf Bahta setting a Swedish record of 8:37.50.

Worrying times for Kenya’s Olympic 3000m steeplechase champion Conseslus Kipruto, who had to drop out of last week’s race at the IAAF Diamond League meeting in Lausanne because of a painful ankle, and who made a late decision here not to start.

In Kipruto’s absence, the man who took silver behind him in Rio, Evan Jager of the United States, earned victory in 8:01.29, the fastest time run this year, with Kenya’s two-time Diamond Trophy winner Jairus Birech second in a season’s best of 8:07.68 and another US runner, Stanley Kebenei, third in a personal best of 8:08.30. 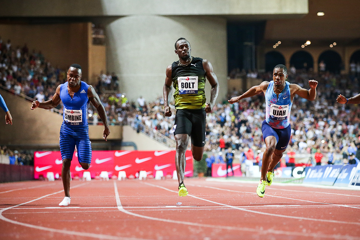