In her final competition of the indoor season earlier this year, Stevens was denied a potential American indoor 200m record of 22.28 at the NCAA Indoor Championships when it was deemed that she had committed a lane violation.

But, competing in her first individual races of the outdoor season, Stevens made no such errors on Saturday as she kicked off her summer campaign in record-breaking form.

The Oregon student opened her day by running second leg on a 4x100m team that broke the collegiate record with 42.12. The Oregon quartet of Makenzie Dunmore, Stevens, Hannah Cunliffe and Ariana Washington had set the previous record of 42.34 just two weeks prior at the Florida Relays.

LSU finished second to Oregon in Torrance, also finishing well inside the previous record with their time of 42.14.

“We didn’t really set out to run an exact time,” Stevens told RunnerSpace.com. “We just set out to execute better than last time.”

Olympic bronze medallist Clayton Murphy also got his season off to a strong start as he won the 800m in a meeting record of 1:43.60, the second-fastest time of his career behind the 1:42.93 he ran at the Rio 2016 Olympic Games.

He closely followed world indoor bronze medallist Erik Sowinski during the first half of the race as they covered the opening 400m in 51.32. But no one was able to match Murphy on the second lap as he kicked on to finish more than two seconds in front of Eliud Rutto.

Oregon claimed another collegiate record at the Mt SAC Relays as Raevyn Rogers won the 800m in 1:59.10. The 2013 world U18 bronze medallist was third at half way but came through strong in the closing stages to take more than half a second from her PB, breaking the collegiate record that was set 27 years ago by Suzy Favor-Hamilton. World indoor finalist Laura Roesler was second in 1:59.54.

Having been previously denied a legal sub-10-second clocking on four occasions due to excessive tailwinds, Ronnie Baker finally became a fully-fledged member of the sub-10 club by winning the 100m in 9.99 (0.1m/s). The US indoor champion finished a metre in front of Britain’s CJ Ujah (10.10) and former US champion Mike Rodgers (10.11).

Elsewhere, Egypt’s Mostafa Amer Hassan set a national record of 21.31m to win the men’s shot put, while Gwen Berry sent her hammer out to a world-leading 74.62m. World Championships qualifying marks were also achieved by Canada’s Michael Mason, who leapt 2.30m in the high jump, and Japan’s Seito Yamamoto, who cleared 5.70m in the pole vault. 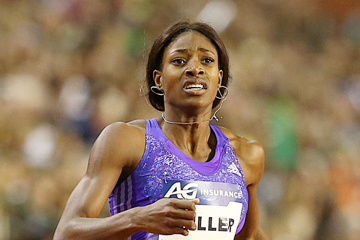 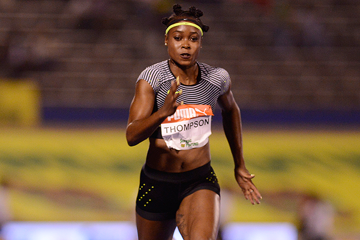