There was a double triumph for Ethiopian runners at the Tata Mumbai Marathon as Amane Gobena and Solomon Deksisa won at the IAAF Silver Label road race in 2:25:49 and 2:09:34 respectively on Sunday (21).

Gobena, now 35, made up for the disappointment of missing out on selection for the IAAF World Championships last summer by winning her first marathon in three years, taking her career record to eight wins from 22 starts over the classic distance.

Led by a male pacemaker, a four-strong group – Gobena, Kenya’s defending champion Bornes Kitur, and the Ethiopian pair of Shuko Genemo and Birke Debele – went through the halfway point in a surprisingly quick 1:12:27 to give rise to some speculation that the course record of 2:24:33 by Kenya’s Valentine Kipketer in 2013 might be under threat.

Shortly after 21 kilometres, Kitur started to push hard and soon found she had only Gobena for company.

The pair, still with the Kenyan pacemaker Bernard Soi in attendance, stayed together until 31 kilometres when Kitur then started to struggle with the relentless pace and left her Ethiopian rival out on her own at the front.

Gobena then focused on her task and produced an impressive exhibition of solo running. Although she tired slightly over the final three kilometres, the Ethiopian still came home in the second fastest winning time in the history of the Mumbai Marathon, which this year celebrated its 15th edition.

Kitur finished second in 2:28:48, a personal best by 13 seconds – claiming her third successive year on the Tata Mumbai Marathon podium after second in 2016 and winning last year – while Genemo was third in 2:29:41.

Deksisa arrived in the Indian city as the fastest man in the field, having set a PB of 2:06:22 at the 2016 Rotterdam Marathon, but the 23-year-old had never won a race over the classic distance.

With the gun having gone at 7:10am local time just as the sun was starting to rise and the temperature already 22C, Deksisa notably stayed at the back of the leading pack, avoided dictating the pace.

“With pacemakers, I saw no reason to do anything other than stay at the back of the leading pack and I was always comfortable,” said Deksisa.

After a fast first 10 kilometres, the pace eased up and a leading group of 11 men went through the halfway point in 1:04:28, about 30 seconds slower than had been requested from the pacers.

The pace continued to drift away from that required to improve on Gideon Kipketer’s 2016 course record of 2:08:35 until Joshua Kipkorir surged at 26 kilometres.

“The pacers couldn’t do the job they were asked to do and were dropping out early, so I tried to make the race quicker,” said Kipkorir.

The Kenyan, who finished second at the Mumbai Marathon 12 months ago, kept pushing hard over the next nine kilometres and the leading group had been whittled down to three by 35 kilometres: Kipkorir, Deksisa and his Ethiopian compatriot Shumet Akalnaw.

Shortly afterwards, Deksisa threw down the gauntlet and started to go through the gears. He quickly put a 40-metre gap between himself and Akalnaw, with Kipkorir drifting further back. Despite Akalnaw clawing back the deficit on Deksisa to perhaps 15 metres with three kilometres to go, that was to be the order they finished in.

“The competition was good; it wasn’t too hard, although the last five kilometres were difficult,” said Deksisa. “I was nervous over the last 700 metres as there were twists at the finish and I didn’t know the course. I was worried Shumet might be gaining on me.”

Approximately 44,000 runners took to the roads in Mumbai for six different races over varying distance in what has become an annual event in the city on the third Sunday of January and one of Asia’s biggest mass-participation running events. 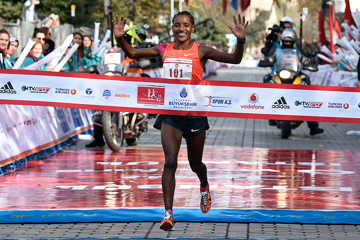