Tennessee’s Christian Coleman was the stand-out performer on the final day of the NCAA Indoor Championships in College Station on Saturday (11), winning the 60m and 200m with some of the fastest times in history.

He won the shorter event by a clear margin, tying the US collegiate record of 6.45 that had stood for 18 years and moving to equal sixth on the world indoor all-time list. For the second year in succession, Houston’s Cameron Burrell had to settle for second place, clocking 6.54.

Coleman was back on track again just 80 minutes later, this time for the 200m, where his victory was even more decisive. Drawn in lane five in the first of two sections, Coleman sped away from the opposition to win in 20.11.

Coleman, whose winning time was just 0.01 shy of Wallace Spearmon’s US and collegiate record, now moves to third on the world indoor all-time list. Alabama’s Jereem Richards won the other section in 20.31 but was second overall.

As is often the case at the NCAA Championships, the sprints provided the bulk of the top performances.

Fred Kerley of Texas A&M University had underlined his potential in recent weeks when clocking a world-leading 45.02 for 400m at the start of February and following it with 44.94 on an oversized track in Nashville. After cruising to a 45.10 heat win on Friday, the 21-year-old crushed the opposition in the final to win in 44.85.

The performance moves him to fourth on the world indoor all-time list, making him just the fifth man in history to run 400m within 45 seconds indoors. The four other men to achieve the feat – Kerron Clement, Michael Johnson, Kirani James and LaShawn Merritt – are all Olympic gold medallists.

The Kerley brothers later teamed up in the 4x400m. Fred Kerley gave his team a one-second lead thanks to his 45.08 opening leg, but Florida held the advantage at half way and maintained it through to the final changeover. Mylik Kerley then took up the running for Texas A&M and his 45.39 split put them back in the lead, taking down the meeting record in the process with 3:02.80.

More importantly, it gave Texas A&M the overall men’s team title, winning by just half a point from Flordia, 46 to 45.5.

Kentucky’s Tim Duckworth went into the final event of the heptathlon with a 224-point lead – about 21 seconds in 1000m terms – over Georgia’s Devon Williams. But Williams, whose sister Kendell had won the pentathlon 24 hours prior, produced a PB of 2:41.26 to finish 23 seconds ahead of Duckworth, winning the overall title with a PB of 6177.

Duckworth was rewarded with a PB of 6165, adding 159 points to the British record he set last month.

When Oregon’s Deajah Stevens crossed the line in the 200m heats on Friday, the clock flashed up with a US indoor record of 22.28. But moments later she was disqualified for a lane infringement and so missed out on a place in the final.

Her team-mates rose to the occasion, though, as NCAA outdoor 100m and 200m champion Ariana Washington blitzed to a 22.42 victory with fellow Oregon sprinter Hannah Cunliffe taking second in 22.53. Washington’s time is the fastest indoor 200m run since 2008 and moves her to 10th on the world indoor all-time list.

Cunliffe had earlier overcome a bad start to win the 60m in 7.14 ahead of Kentucky’s Javianne Oliver (7.16) with Washington finishing third in 7.20 and Stevens fifth.

Having won her heat in 7.87 on Friday, Oregon’s Sasha Wallace won the 60m hurdles final in 7.90, 0.03 ahead of Devynne Charlton. Florida’s Grant Holloway won the men’s sprint hurdles in 7.58.

The women’s 400m was the closest contest of the championships as just seven thousandths separated Shakima Wimbley and Kendall Ellis. Both were timed at 51.07 with Wimbley being awarded the victory in a photo-finish.

Ellis gained redemption in the 4x400m as she anchored the University of Southern California to a collegiate record of 3:27.03, holding off a strong challenge from Oregon who placed second in 3:27.07, also inside the previous collegiate record. Oregon, however, had already done enough long before the final event to win the women’s team title with a record 84 points, 33 more than Georgia.

Two out of three for Cheserek

Oregon’s Edward Cheserek was attempting an audacious triple in College Station. After winning the 5000m on Friday, he lined up for the mile at the beginning of Saturday’s programme. Always present near the front, Cheserek led with three laps remaining but was then caught on the hop when New Mexico’s Josh Kerr threw in a 27.43-second lap.

The Briton followed it with an quicker circuit of 26.52 as Cheserek tried desperately to stay in touch, but a final sub-27-second lap from the European junior champion gave him the victory in 4:03.22, finishing more than two seconds in front of Cheserek.

Cheserek bounced back at the end of the session, though, winning the 3000m in 7:55.91 to bag his 17th individual collegiate title. 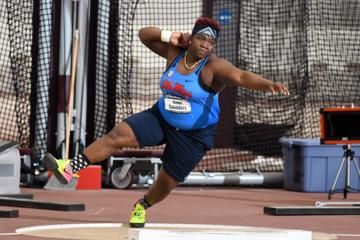