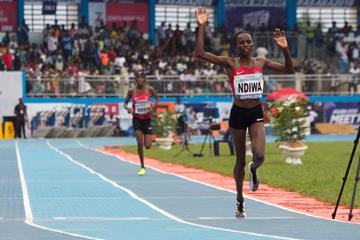 Ndiwa and Aprot claim Kenyan 1-2 in 10,000m at African Championships in Asaba

A dominant 1-2 finish in the 10,000m by Kenyans Stacy Ndiwa and Alice Aprot highlighted the fourth day of competition at the 21st African Athletics Championships in Asaba, Nigeria, before another near capacity crowd at Stephen Keshi Memorial Stadium on Saturday (4).

Given the high late afternoon heat and humidity, the performance was as impressive as it was dominating. Such were the conditions that three of the 11 entrants dropped out well before the Kenyan pair forged on on their own with eight laps to go. That was when teammate Pauline Koriakwang, bothered by a troublesome Achilles, stepped off the track, taking Kenya's sweep ambitions with her.

For the next seven laps, Ndiwa and Aprot were in lockstep, with the taller Aprot, racing in a black hat, pushing the pace. But at the bell, Ndiwa bolted to the lead, one she extended down the backstretch before eventually reaching the finish in 31:31.17, a lifetime best for the 25-year-old. She immediately dropped flat on the track.

Stacy Ndiwa drops to the track after winning the African 10,000 title in Asaba (Bob Ramsak) © Copyright

"We decided to work together so we could break away from the others, because we weren't sure about their kick," said the 25-year-old Ndiwa, who took silver at the Commonwealth Games in April. "I didn't have a good kick there so I've been working a lot on my speed since then." It paid off.

Aprot, the winner at these championships two years ago, clocked 31:36.12 to take silver. “I didn’t mind helping with the pace, even if I finished second,” the 2016 Olympian said.

African indoor record holder Fabrice Zango Hugues took command of the men's triple jump from the opening round and held on to claim Burkina Faso's first title of the championships. After opening with 16.92m --an effort good enough for the win-- he improved to 17.11m in round five, the first 17 metre-plus leap for the 25-year-old. Hugues was the silver medallist two years ago.

Godfrey Mokoena of South Africa was second with 16.83m, just edging Algerian Yasser Triki who hit his 16.78m best in the final round.

Another victory for South Africa came in the men's 110m hurdles courtesy of Antonio Alkana who successfully defended his title. The 28-year-old dominated the race, building a clear advantage by midway point before pulling away for the 13.51 victory. The closest battle was the one for second. Abejoye Oyeniyi of Nigeria took that one by a scant 0.01 in 13.87 over Wellington Zaza of Liberia.

There was an Egyptian sweep in the men's hammer throw, won by Mostafa Al Gamal with 73.50m. Eslam Mohamed was second with 70.32m and Hassan Abdelgawad third with 69.90m.

Kelechi Nwanaga took Nigeria's only gold of the day, prevailing in the women’s javelin with 56.96m. Jo- Ané Van Dyk of South Africa, the 2016 world U20 silver medallist, was second here as well with 53.72m, with Ugandan Josephine Lalaw Joyce reaching 51.33m to take the bronze.

Odile Ahouanwanou of Benin won the shot put with a 14.10m best and is currently in second with 3671. Hoda Hagras of Egypt is third with 3288 in the three-woman field.

There were no surprises in the opening round of the women's 800m where the event's big two, world and Olympic champion Caster Semenya of South Africa and Francine Niyonsaba advanced easily to tomorrow's final after both finished second in their respective heats. Rababe Arafi, the silver medallist in yesterday's 1500m, did not finish in her heat.

Meanwhile, 100m winner Marie Josee Ta Lou was the fastest in the afternoon's 200m semi-finals, coasting to a 23.34 victory in the first of three heats.

The championships conclude to tomorrow with 16 titles to be decided.

Day five will be livestreamed here.