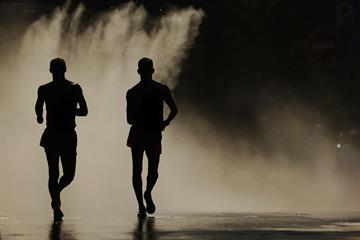 Niu Wenbin claimed a surprise victory in the men’s 50km race walk at the Chinese National Race Walking Grand Prix in Huangshang on Sunday (5), clocking a world-leading time of 3:46:12 in a competition which also doubled as the country’s 50km trial event for the IAAF World Championships London 2017.

The 26-year-old Niu was the sixth-place finisher in the junior 10km at the 2010 IAAF World Race Walking Cup in Chihuahua, Mexico. But in recent years, Niu, who competes for Team Yunnan, hasn’t represented China in international competitions.

On Sunday, Niu patiently stayed in the leading group for much of the race. Zhang Lin from the Army team, who finished sixth at the IAAF World Championships Beijing 2015 and seventh at the World Race Walking Cup 2014 in Taicang, pulled away to take the sole lead with 12 kilometres to go. But he only managed to maintain his lead for some four kilometres before being passed by the chase pack spearheaded by Niu.

Niu continued to extend his advantage in the waning kilometres and broke the tape in style, improving his personal best by 2:20. Wu Qianlong from Inner Mongolia held off a powerful challenge from Shandong’s Bian Tongda to finish second in 3:48:38. Bian finished third with a three-second deficit as the 25-year-old improved his PB by more than 10 minutes.

“There are several Chinese race walkers that are all on the same level in men’s 50km event. Whoever is in a better form stands a bigger chance to win,” said Wu, who is the reigning 50km champion at the National Games. “So in general I am satisfied with my race today.”

The fifth finisher at the Rio Olympics Yu Wei and Wang Zhendong, 11th in Rio, both chose to skip the event in Huangshan, while the 38-year-old veteran Han Yuchen, who also competed in Rio, finished sixth in 3:56:23.

Despite the absence of Olympic medalists Wang Zhen, Chen Ding and Cai Zelin, the men’s 20km event on Saturday still witnessed a high-level contest, with all the top seven finishers managing to improve their PBs.

Rising star Wang Kaihua cut nearly two minutes off his career best to register a world-leading time of 1:17:54 en route to his victory. His winning mark is the fifth fastest result ever achieved by a Chinese race walker.

However, Wang still needs to prove his worth at the 2017 IAAF Race Walking Challenge in Taicang next month, as the 20km events there will serve as the national trials for the World Championships.

“I am a little surprised with my time as my goal was just to achieve a sub-1:19 result,” Wang said.

Wang finished fourth at the Olympic trials last year and had to sit out the race in Rio where Wang Zhen and Cai Zelin took the gold and silver medals respectively. The only time the 23-year-old has competed at a major senior international competition was the 2016 IAAF World Race Walking Team Championships in Rome, where he finished 13th in 1:21:12.

World silver medalist Lu Xiuzhi also set a world-leading time of 1:26:28 in the women’s 20km race walk, but was not happy with her performance.

“I did not feel quite well in the winter, maybe because I was too tired last season, so I did not train much,” Lu explained. “I need to resume regular training as soon as possible and make myself strong again.”

Wang Na, the 2014 world U20 silver medallist, trailed one second behind Lu to finish second. Yang Jiayu finished third in 1:26:35.