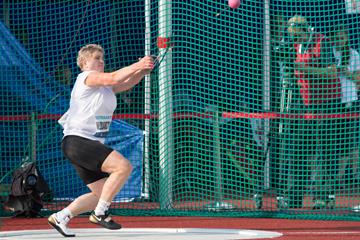 Wojciech Nowicki once again defeated world hammer champion Pawel Fajdek while Anita Wlodarczyk extended her own world lead in the event to highlight the Polish Championships which concluded in Lublin on Sunday (22).

Fajdek, meanwhile, only produced two measured throws, but came close to stealing back the win with an 80.14m throw in the final round.

Wlodarczyk was more dominant on the women's side, reaching 76.57m in the third round to take the lead, before extending it with a 77.05m throw in the fourth. She then capped the competition with a 79.59m throw in round five to add nearly a metre to her world lead.

There were other high quality face-offs.

Michal Haratyk took the shot put title with a 21.85m third-round effort, well ahead of Konrad Bukowiecki, who reached 21.04m in the same round. Jakub Szyszkowski was third with 20.18m.

Piotr Malachowski took the discus title with a 65.78m season's best. Robert Urbanek was nearly three metres back in second with a 62.91m best effort.

In the men's pole vault, Pawel Wojciechowski beat Piotr Lisek on countback at 5.70m before bowing out with three misses at 5.80m. Justyna Smietanka won the women's title at 4.50m, a personal best.

Among the key highlights track were solid victories in the sprint hurdles. Klaudia Siciarz won the women's 100m hurdles in a wind-assisted 12.74 while Damian Czykier took the men's 110m hurdles title in 13.37.