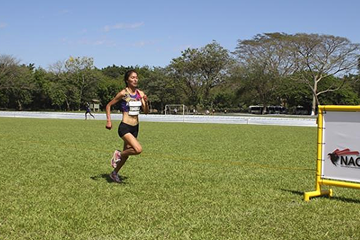 Donning the US uniform for the third time in a continental cross-country race, the 33-year-old Gray found an extra gear to finally rise to the top of the podium, following a seventh-place finish at the inaugural 2015 Pan American event in Colombia and a third-place finish at the NACAC event last year.

Gray, the 2016 world mountain-running champion, completed the distance in 30:02, three seconds ahead of Maiyo, who repeated his silver medal performance from the 2015 edition.

Pacheco, a marathon specialist, avoided the USA sweep by overtaking Simbassa by one second to claim bronze in 30:08.

The women’s race was an all-South American affair as Carmen Toaquiza became the first Ecuadorian athlete to win a continental title on the mud and grass. 22-year-old Toaquiza, who competed at the 2017 World Cross Country Championships and has a 2:40:08 marathon PB, showed her international racing experience to cross the finish line first in 35:04, not far off from her 10,000m personal best on the track.

Gladys Machacuay tried to emulate her fellow Peruvian Gladys Tejeda, the gold medallist in 2015, but had to settle for second in 35:06, followed by her teammate Luz Mary Rojas one second adrift.

USA’s Susan Tanui was the first non-South American runner in fourth with 35:22.

In the U20 races, Brogan MacDougall was a class apart in the U20 women’s 6km race, leading a Canadian medal sweep and adding a second continental title to her family, after sister Branna won gold in 2016.

The 2017 NACAC champion was joined in the lead by fellow Canadian Laura Dickinson, a two-time 2017 Pan American U20 champion in 3000m steeplechase and 5000m, but soon moved away to win comfortably in 20:36.

The Canadian junior men were determined to go for another podium sweep in the 8km contest, but USA’s Connor Jeffrey stood in their way, moving clear from a trio of Canadians to take his first international victory.

The competition was also held in conjunction with the 13th Central American Cross Country Championships, which also staged the first mixed relay for both U20 and U18 athletes.