Sprinter Matthew Boling confirmed his status as a rising star of the sport as he led the USA to two world U20 relay records* while the US 4x400m women added one more to provide a sensational finale to the 20th Pan American U20 Championships, held at San Jose’s National Stadium in Costa Rica on 19-21 July.

After becoming the first man in 20 years to win the 100m and 200m sprint double at the championships with personal bests of 10.11 and 20.31, the 19-year old anchored the USA squad to world U20 records in the 4x100m and 4x400m, becoming the first athlete to win four gold medals at the same edition of the event.

He returned to the track on Sunday and ran the second leg in the 4x400m relay as his team went on to break the global mark of 3:00.33, set two years ago at the same meet in Peru.

As it happened two years ago, the men’s 4x400m world U20 record proved to be a brilliant finale to the championships, held for the first time in Central America.

“It’s been wild,” said Boling, who will take a short vacation with his family in Costa Rica before starting his college career at the University of Georgia in Athens. “My goal was to make an international team here and to win two individual golds and two world records, it’s amazing.

Runners-up Jamaica (3:00.99) was rewarded with a national U20 record, followed by Brazil, who improved their own South American U20 record to 3:02.84. Barbados, Costa Rica and Ecuador also bettered their national U20 marks.

The men followed a superb performance by their female counterparts, who erased another 15-year-old world U20 record by a whopping 3.54 seconds.

Alexis Holmes and Kimberly Harris took the team to 1:42 minutes at the halfway mark. Ziyah Holman maintained a comfortable lead at the last exchange and 15-year old world U20 leader and 400m gold medallist Kayla Davis finished strong to stop the clock at 3:24.04, significantly quicker than the 3:27.60 set by another USA squad at the 2004 World U20 Championships.

The US women's 4x400m team at the Pan-American U20 Championships

Outside of the relays, Brazil’s Alison Alves dos Santos continued with his breakthrough season.

Ten days after winning the World University Games title in Italy, the 1.98m-tall athlete lowered his South American U20 record in the 400m hurdles to 48.49 to move up to third on the world U20 all-time list and fifth on this year’s senior list.

Dos Santos completed a Brazilian double in the 400m hurdles; just minutes before his triumph, teammate Jessica Vitoria de Oliveira improved the championship record and South American U20 mark to 55.94.

“I am very happy to be part of the Pan American Championships,” said Dos Santos. “Breaking the record was one of my goals. I am looking to improve my times and be better every time. Overall, I am very happy with our team’s performance. Jessica is a good friend and the 4x400m team was amazing with a South American U20 record. The season is not over yet. My next goal will be the Pan American Games in Lima.”

A month after setting a world U20 in the 20km race walk, Glenda Estefania Morejon continued her breakthrough season. The 19-year old missed the championship record by just two seconds but was happy to win Ecuador’s first gold medal of the competition.

Ecuador added another gold medal on the final day when Juleisy Angulo threw the javelin to a South American U20 record of 58.96m, the third-best throw in the world by an U20 athlete in 2019.

Anna Hall also produced a standout performance in the heptathlon. The USA U20 champion closed the competition by a massive personal best in 800m (2:10.11) for a wind-assisted score of 5847. Her wind-legal leap of 5.49m in the long jump gives her a record-eligible PB score of 5829.

The 400m world leaders also delighted the crowd with fast time over one lap of the track. 17-year old Justin Robinson ran 45.04, 0.04 seconds off the championship record, while 15-year old Kayla Davis dominated the women’s field in 51.61. Lanae-Tava Thomas also shone in the 200m with 22.80.

Chile will host the 21st edition of the Pan American U20 Championships in 2021.

BACK
Pages related to this articleAthletes
Kayla DAVIS 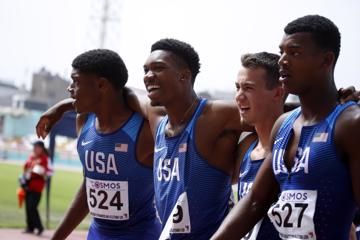 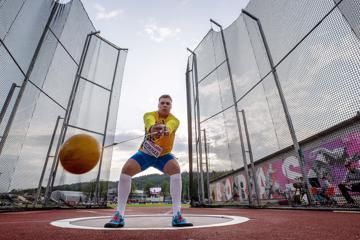