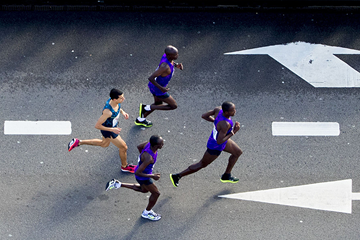 Collins Chebii and Gebayanesh Ayele came up trumps at the 20 Kilometres de Paris to take the titles at the IAAF Bronze Label road race on Sunday (8).

Defending champion Mourad Amdouni was a late withdrawal due to lack of form. “I went back to training too late (to be competitive),” the 29-year-old said on social media on Saturday.

His absence opened up the way to Stephan Ogari and Alfred Cherop, who finished second and third respectively last year, just a few seconds behind Amdouni. But it was Chebii, the fourth-place finisher last year, who eventually reaped the benefits.

From the gun, a large group separated itself from the field and covered the first kilometre in 2:55. All the favourites were in the group, apart from Hassan Chahdi, who was distanced by some 20 metres. “I thought the tempo would be cooler,” said the French marathoner, who promptly bridged the gap.

Spearheaded by Ogari, a pack of 14 runners reached the five-kilometre mark in 14:53 before Chahdi took over from Ogari and ramped up the pace. The lead pack was subsequently whittled down to nine men and they passed through the half-way mark in 29:07, meaning the second five-kilometre section was covered in 14:14.

Ogari and Chahdi continued to share the lead as the latter pressed on with seven kilometres remaining. European champion Meucci, fifth in the marathon at the IAAF World Championships London 2017, was the next to drift back, passing the 15km mark 30 seconds in arrears of the front pack (43:47 against 44:17).

After 17 kilometres, Chahdi started to struggle, undoubtedly paying for his earlier efforts.

With two kilometres to go, Chebii – whose best credentials this season had been an 8:34.46 clocking for the 3000m steeplechase – made a break at the front of the lead pack. He opened a little gap over his opponents and managed to hold them off to win in 58:28, pulling off his first victory at this level.

“I’m very happy with this success. I wanted to win and I started pushing hard at the 18km,” said the 20-year-old, who will be aiming to improve his relatively modest half marathon PB of 1:04:15 set last January. “My next goal is to run a half marathon but I don’t know yet which one.”

Menjo finished second, six seconds in arrears, as Florian Carvalho held on to take third, 12 seconds behind the winner in what was a frantic last kilometre.

“I’m very satisfied,” said Carvalho, who had never raced farther than 10 kilometres until today. “I didn’t think I would be able to run a sub-59 time. I was good at the aerobic level, but from the 13km it was very tough at the muscular level. I have to work still a lot. My goal is to clock about 28:30 over 10 kilometres and then to run a half marathon to qualify for the World Half Marathon Championships.”

In the women’s contest, a group of six runners including Chaltu Dida, Gebayanesh Ayele, Gudeta Bekelech, Susan Jeptoo, Mekdes Woldu, and Nancy Arusei hit the five-kilometre mark in 16:38. Then Ayele, who entered the race at short notice, ratcheted up the rhythm, which only Dida, Bekelech and Jeptoo were able to sustain.

The quartet reached the 10-kilometre checkpoint in 32:44, with Arusei 10 seconds adrift and Woldu 22 in arrears.

Dida, who won the ‘Paris-Versailles’ race two weeks ago, then faded and was followed soon after by Bekelech, leaving Jeptoo and Ayele competing for the victory.

The former appeared to be the favourite courtesy a recent half marathon PB of 1:09:02, more than a minute quicker than Ayele’s best.

But Ayele continued to press and with five kilometres remaining, Jeptoo, who was third last year, couldn’t live with the pace. Ayele extended her lead in the closing stages and broke the tape in 1:06:02, 14 seconds ahead of her compatriot, as Bekelech rounded the podium in 1:06:40.

Sophie Duarte was the first Frenchwoman, wounding up seventh in a time of 1:09:35.