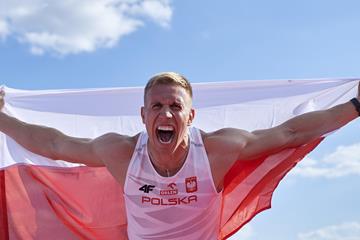 Poland doubled its victory tally to ten on the final day of competition to clinch the team title at the European Athletics Team Championships Super League before an enthusiastic home crowd in Bydgoszcz on Sunday (11).

Putting their versatility on display across the programme, Poland tallied 345 points to handily unseat defending champion Germany, who scored 317.5. In a tight team battle, France was just 1.5 points behind with 316.5, just half a point in front of Italy.

Piotr Lisek got the day underway on the infield with a 5.81m clearance to win the pole vault, 10 centimetres better than Swede Melkar Svard Jacobsson and world record holder Renaud Lavillenie. Lisek, who improved to 6.02m in Monaco last month, topped out with three misses at 6.03m.

On the track, Adam Kszczot produced another tactically superior race to win the 800m, moving from fifth midway through the final bend to first, forty metres from the finish. The Pole held on for the win in 1:46.97, holding off Briton Jamie Webb (1:47.25) and Spain's Alvaro de Arriba (1:47.48).

In similar fashion, Sofia Ennaoui timed her kick well to take a convincing victory in the women's 1500m in 4:08.37, ahead of Germany's Caterina Granz, who clocked 4:08.52.

"I came here straight from training camp in St. Moritz, I was tired and didn’t feel fresh, so today's result was really great," said Ennaoui, who raced for just the second time this outdoor season.

In the men's discus, Piotr Malachowski reached 63.02m in the final round to wrestle the lead from German Martin Wierig, who took a brief lead with a 61.84m effort, also in the final round. World leader Daniel Stahl was forced to settle for third with 61.38m.

Poland capped its competition with a dominating victory in the penultimate event, the women's 4x400m relay, with 400m winner Justyna Swiety-Erzetic bringing the baton across the line in 3:24.81, well clear of the British quartet who clocked 3:27.12.

The season's world leader at 7.16m took command of the competition with a 6.88m leap in the second round, before going on to sail 7.11m in the fourth to notch her fifth competition beyond seven metres this season. At +2.2 m/s, the performance was just marginally above the allowable limit for record purposes, but nonetheless underscored the 25-year-old's current form.

“I always try to push myself and do my best and last week I jumped 7.16, so I’m not surprised I was able to jump so far today.”

Behind her, Abigail Irozuru of Great Britain jumped 6.75m in the first round to edge Frenchwoman Eloyse Lesueur-Aymonin by three centimetres for second. Both were season's bests.

Mihambo’s was one three wins on the day for Germany, all on the women’s side of the programme.

Hanna Klein was a convincing winner in the 5000m, breaking from the field over the final lap en route to a 15:39.00 performance. Spain's Maitane Melero was second, more than five seconds back in 15:44.55.

At almost the same time, Christina Schwanitz took the women's shot put with 18.93m, ahead of Swede Fanny Roos (18.54m).

The highlight for Great Britain and Northern Ireland, who finished fifth with 302.5 points, came in the men's triple jump when Ben Williams flew to a career best 17.14m in the third round to collect the win. It was the 27-year-old's first leap beyond 17 metres, adding 40 centimetres to his previous lifetime best. Williams was second in this competition two years ago.

Simo Lipsanen of Finland was a distant second with 16.76m.

Hurdles victories for Ortega and Bogliolo

In one of the bigger showdowns of the day, Olympic silver medallist Orlando Ortega defeated European champion Pascal Martinot-Lagarde in the 110m hurdles, clocking 13.38 (-1.8m/s) to the Frenchman's 13.46. It was the 28-year-old's fifth straight victory and sixth in eight competitions this year.

Rising Italian star Luminosa Bogliolo built a visible lead by the sixth hurdle, but experienced German Cindy Roleder, running just to her right in lane six, kept up the pressure, as did Pole Karolina Koleczek, just to her outside, in seven. But Bogliolo, the world University Games champion, maintained her composure to win on the lean over Roleder by a scant 0.002. Both were credited with 12.87, and Koleczek 12.88.

Mujinga Kambundji swept past Jodie Williams midway through the home straight to secure the 200m in 22.72, a season's best for the Swiss star. Williams clocked 22.89.

The men's half lap came down to the line, with Briton Richard Kelty holding off Eseosa Desalu of Italy by 0.03 in 20.66. Frenchman Mouhamadou Fall was in the finish line mash-up, just another 0.01 back to finish third.

Other winners included Yuliya Levchenko who topped 1.97m on her third attempt to take the honours in the high jump, equalling her outdoor season's best. The 21-year-old Ukrainian then went out after three tries at 2.02m.

Spain's Fernando Carro held off Finn Topi Raitanen to claim the steeplechase title by 0.42 in 8:27.26. Pole Krystian Zalewski was another step behind to take third in an 8:29.12 season's best.

And finally, Davide Re, the 400m winner yesterday, made up a substantial deficit to anchor Italy to victory in the closing 4x400m relay, crossing the line in 3:02.04, edging French anchor Loic Prevot by 0.04.