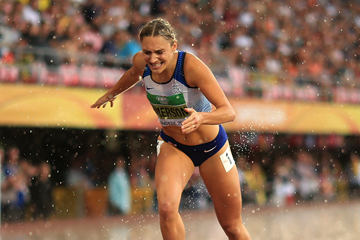 Niamh Emerson of Great Britain crosses the finish line in the 800m to win gold in the women&#39;s heptathlon at the IAAF World U20 Championships Tampere 2018 (Getty Images) © Copyright
13 JUL 2018 Report Tampere, Finland

As if the contest hadn’t already been dramatic enough throughout the previous 36 hours, heavy rain started to fall before the third and final heat of the heptathlon 800m.

The brutal conditions only served to highlight the difficulty of the challenge that faced the two women at the top of the leader board, Niamh Emerson and Sarah Lagger.

Emerson had led since the second event, but defending champion Lagger had closed to within two points of the Briton going into the final discipline. In 800m terms, it meant that the Austrian had to finish 0.14 ahead of Emerson to retain her title. But with the pair having such similar ability – Emerson had the slightly faster PB; Lagger had the marginally quicker season’s best – neither one had a particularly easy task.

The duel had started on Thursday morning with the 100m hurdles. Both drawn in the third of four heats, Emerson clocked a PB of 13.76 to Lagger’s 14.21. Australia’s Celeste Mucci was the fastest of the day, though, winning the fourth heat in 13.29. Poland’s Adrianna Sulek also got off to a strong start with 13.80.

Having won the individual javelin title on Wednesday evening, European U20 heptathlon champion Alina Shukh recorded 14.68 in the 100m hurdles but then withdrew from the competition while warming up for the high jump, citing a hamstring injury.

Emerson, the Commonwealth bronze medallist, went into the overall lead during the high jump. The last woman left jumping, Emerson went clear at an equal PB of 1.89m while Lagger went over a season’s best of 1.77m.

Sulek, meanwhile, was distraught after clearing just 1.62m, some 21 centimetres below her lifetime best and forcing her down to 16th place in the overall standings.

Lagger increased the pressure in the third event, sending her shot out to a championship best of 14.38m. Emerson managed 12.27m while a fired-up Sulek threw a PB of 13.21m to move into 10th overall.

Emerson went into the second day with an 81-point lead over Lagger but was also well aware of the fact that her rival was a stronger javelin thrower. She needed a strong showing in the long jump to maintain her hopes of taking the gold medal.

Her first jump landed well beyond six metres but was a foul. She recorded a safe 5.96m with her second jump but then watched Lagger sail out to 6.15m with her final jump. Emerson responded with a wind-assisted 6.31m to extend her lead over the Austrian.

Lagger wasn’t letting the pressure get to her, though, and produced three throws in excess of 45 metres in the javelin. Her best of 45.76m was several metres farther than Emerson’s top throw of 39.02m, reducing the overall gap between the pair to two points.

Two points, 0.14 in the 800m and a bucket load of rain falling from the sky. That is what the heptathlon boiled down to.

Sulek, who had dropped back down to sixth place after the javelin, was one of the better 800m runners in the field and knew the bronze medal was a possibility if she finished far enough ahead of Rodriguez and Mucci in the final discipline.

Tracked by Emerson and Lagger, Sulek went out hard in the 800m and covered the first lap in 1:02.90. Emerson then moved into the lead with about 250 metres remaining and for a brief moment it looked as though she had kicked too soon.

Lagger doggedly tried to stick close to the Briton but Emerson, who started out in athletics as an 800m runner, dug in as she came off the final bend and eked out every last ounce of energy to get to the finish line first, stopping the clock at a lifetime best of 2:09.74.

Lagger followed almost two seconds later, clocking 2:11.53. It meant Emerson had held on to pole position with a world-U20-leading PB of 6253, the third-best winning score in World U20 Championships history and just 14 points shy of Katarina Johnson-Thompson’s national U20 record.

“It was amazing to win the gold in these conditions,” said Emerson, whose gold medal came just minutes after teammate Jake Norris’s victory in the hammer. “The javelin was ok but the 800m was the best event of the day. This gives me a lot of confidence for the future.”

The only other Briton to win the world U20 heptathlon title was Morgan Lake in 2014. Like Emerson, on that occasion Lake defeated the defending champion to take the gold medal.

Far from disappointed with her performance, Lagger was rewarded with a PB of 6225, an improvement on her own national U20 record. It was the first time in World U20 Championships history that two women had scored in excess of 6200 points.

“I’m so happy, I can't believe it,” said Lagger. “It feels amazing to do well in a big event like this. This was a very useful experience for me ahead of the senior European Championships in Berlin next month.”

Five women – including all three medallists – ran faster than the pre-2018 championship best of 2:12.89 in the heptathlon 800m, but Agathe Guillemot claimed the mark in the first of the three heats with 2:09.37.