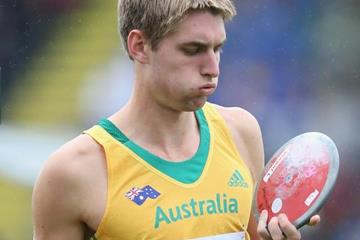 Czech Republic’s Jiri Sykora has regained the lead in the decathlon after dominating the discus with 48.55m, a personal best by nearly three metres.

Sykora, the 2014 world junior leader, had moved to the pole position following the shot put before ended the first day in fifth position despite a good run in the 400m.

He now totals 5991 points after seven events and aims to become the first Czech male athlete to win a world junior title.

Russia’s Roman Kondratyev fell to third in the standings with 5820 points after a 37.56m effort.

Germany’s Tim Nowak moved from sixth to fourth with 5785 points thanks to his 42.42m toss and give him a shot at a medal. Norway’s world youth champion Karsten Warhom is in fifth place but just five points behind the German. He improved his discus best to 36.05m but lost points on the men ahead of him in one of his weaker events.

In the discus, France’s Mathias Ako threw 46.49m for second place in the event itself, followed by Estonia’s Taavi Tsernjavski with 46.16m.