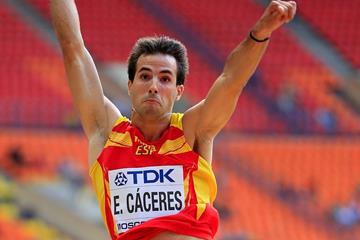 Long jumpers usually don’t like morning qualifying rounds and so quite a few had problems getting their motors started on Wednesday as only three men went over the automatic qualifying distance of 8.10m.

Of those, only one, Spain’s Eusebio Caceres, managed it on his first attempt when he flew out to 8.25m.

Hopefully, Caceres will do better than another memorable occasion when he led the qualifiers, setting what was then a European junior record of 8.27m in the preliminary round of the 2010 European Championships, only to wind up eighth in the final.

South Africa’s 2008 Olympic silver medallist Godfrey Mokoena and local favourite Aleksandr Menkov had problems getting their run ups quite right but eventually jumped 8.16m and 8.11m with their third and final attempts to also secure their place in the final by right, although the latter admitted that he was struggling with some slight back twinges.

The other nine men who will contest Friday’s final all went through as non-automatic qualifiers.

Three other men went over eight metres: Germany’s 2010 European champion Christian Reif reached 8.09m with his first attempt and astutely passed his final two attempts, reckoning correctly that it would be enough to see him through.

By contrast, there were nerve-wracking times for the other eight-metre men on Wednesday. Mexico’s 2013 world leader Luis Rivera had a modest 7.78m followed by a foul before finally getting it right and going out to 8.04m while Greece’s Louis Tsatoumas, a man with a personal best of 8.66m but also a reputation for crashing out in qualifying rounds, had two fouls before finally jumping 8.00m.

USA’s defending champion Dwight Phillips has had injury problems in the last 18 months but showed the battling spirit that has taken him to four IAAF World Championships gold medals by digging deep and hitting a season’s best of 7.95m with his first jump to take his place in the final.

Also going through, albeit not in the manner he would have liked, was Brazil’s 2012 World indoor champion Mauro Vinicius da Silva, who could only jump 7.92m and scraped into the final in 11th place.

Inevitably with 29 men trying to make the final, there were likely to be some big name casualties in the qualifying rounds and none were bigger than Great Britain’s London 2012 Olympic Games champion Greg Rutherford.

Just a year on from his triumph in front of his home fans, Rutherford had been struggling to bounce back from a hamstring injury sustained at the IAAF Diamond League meeting in Paris last month and managed a best of just 7.87m, well shy of the 8.35m personal best set last year, although he was just two centimetres shy of making the final.

“The season wasn't going too badly up until Paris, when I ruptured a hamstring. I broke all the rules, really, in rehabbing quicker than I think anybody has in history from a ruptured hamstring,” reflected Rutherford.

“Training has been going really well and I woke up today and thought: 'This is going to be good day'. But I knew after the final jump when I saw 7.87m come up that it wouldn't be enough and, even if it was enough, it's not really competitive,” he added.

Australia’s Fabrice Lapierre, the 2010 World Indoor Championships and Commonwealth Games gold medallist, fared even worse and could not even register a valid jump.