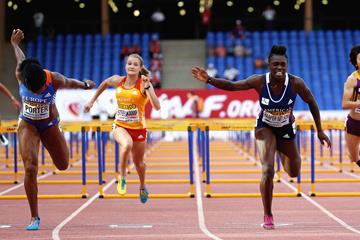 Dawn Harper Nelson has led the world list in 2014 since 5 July with the 12.44 she clocked at the IAAF Diamond League meeting in Paris.

Since missing out on a medal at the IAAF World Championships in Moscow last year, the 30-year-old US athlete has been back in the shape that took her to Olympic gold in Beijing in 2008 and she came close to matching her world-leading time with a double record-breaking performance in Marrakech.

The Americas representative would also be the first to give credit to Europe’s Tiffany Porter for pushing her close with a run that also took the British woman into her national record books.

Harper Nelson held a marginal lead from the start and refused to yield, crossing the line in 12.47, which earned her a Continental Cup record, eclipsing the 12.60 set by Cornelia Oschkenat of Germany in Barcelona back in 1989.

It also broke the African all-comers’ record of 12.63, held by Angela Atede of Nigeria.

Just 0.04 behind Harper Nelson, Porter finished the runner up in 12.51. In doing so, she shaved 0.03 off the British record set by Jessica Ennis-Hill en route to her Olympic heptathlon victory in London in 2012.

Both women finished well clear of Cindy Roleder, who claimed third place for Europe in 13.02.

“I am absolutely blessed for this victory,” said Harper Nelson. “I did not expect such a great time. It’s a big honour to be here and to compete with the other Americas team members from Cuba, Puerto Rico and the other countries.

“Next year I look forward to the World Championships in my second home – Beijing, here I come.”

Porter reflected: “I am absolutely happy, even if I did not win. My season has been topped with a European title and now a national record. I think I deserve a holiday now.”