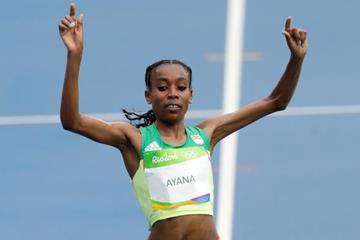 Ethiopia’s Almaz Ayana opened athletics competition in style in the morning session, running a world record* of 29:17.45 to win the women’s 10,000m, the first final of the Rio 2016 Olympic Games.

It was the deepest women’s 10,000m competition in history, with four women finishing within 30 minutes.

The former record of 29:31.78 was set in 1993 by Wang Junxia, less than two years after Ayana was born, and stood for just under 23 years. It was among the oldest remaining records on the track.

“This means everything for me,” said Ayana. “I never thought that this would happen, and I'm so in awe. I'm very happy to get here.”

It was only Ayana’s second 10,000m race, her first being a 30:07.00 in Hengelo earlier this summer which was the fastest-ever debut at this distance. Ayana had previously distinguished herself as the 5000m champion at the IAAF World Championships Beijing 2015

After years of hot conditions for championship 10,000m races, this morning’s final saw overcast and cool conditions favourable for distance running, with the off-and-on drizzle which watered earlier events mostly dried when the 37 starters arrived on the track.

Kenya’s Aprot set the early pace, opening a slight gap in the first kilometre before Ayana moved up to follow her.

By the second 1000m split, the race was already thinned down to Aprot, Ayana, Turkey’s Yasemin Can, and then Cheruiyot and Betsy Saina of Kenya, Dibaba, Gelete Burka, and Molly Huddle of the USA, all stretched out single file.

Aprot’s pace was already aggressive; she was 30 seconds under her own 5000m PB at the halfway mark, and Burka and Huddle had lost contact with the lead group.

After they passed 5000m Ayana, clearly following through on her pre-race plan, moved definitively to the front and increased the pace even more, running her fastest kilometre of the race from 5000m to 6000m.

From there on it was all about Ayana’s time trial.

By 7000m even Cheruiyot had stopped watching Ayana’s back and was simply pushing as hard as she could to hold her place and get to the finish. Dibaba and Aprot exchanged possession of third place several times in the ninth kilometre before Dibaba finally held on to it in the closing laps.

The benefits of the fast early pace followed down the field, with eight national records (counting Ayana’s Ethiopian record) and almost half the field (17 of 35 finishers) recording PBs.

The national records went to Cheruiyot for Kenya, Huddle in sixth for the USA (also a North American record), Sarah Lahti of Sweden, Diane Nukuri of Burundi, Alexi Pappas of Greece, Darya Maslova of Kyrgyzstan, and Sitora Hamidova of Uzbekistan.