Thomas Rohler made it a night to remember on the first evening of action at the Eugene stop of the IAAF Diamond League on Friday (25), the German unleashing the biggest throw ever witnessed at Hayward Field to take maximum points in the men’s javelin with 89.88m.

The competition had been expected to boil down to three-way clash between Rohler and German compatriots Johannes Vetter and Andreas Hofmann, and that was exactly how it played out on a cool, breezy evening in Eugene.

Hofmann seized the lead in the opening round with 86.01m, but that was quickly usurped by Vetter who launched the spear 88.37m in round two. Vetter improved that again in the third round to 89.34m, but after a shaky start (two fouls and 84.82m) along came Rohler in the fourth round with a throw than hung in the air for what seemed an eternity before plonking down 89.88m away.

Hofmann improved to 86.45m in the final round but that was only good enough for third, while Vetter fouled his final two attempts and had to settle for second, handing victory and maximum Diamond League points to Rohler. His mark comfortably surpassed the previous meeting record of 84.68m, held by Julius Yego since 2016, and the German was suitably delighted with the performance, and the chance for javelin throwers to take centre stage at this level.

On Friday night, the javelin took centre stage with @thomasroehler coming out on top once more. The German Olympic champion loved the attention from the @nikepreclassic crowd.#EugeneDL pic.twitter.com/JgBWZDfQB4

“It’s been a process, we’ve been through it all,” said Rohler. “We’ve been in the pre-programme, we made ourselves into the main and now we’re on centre stage. The fans were really happy and we really appreciate it, so it was fun to throw today.”

Afterwards thoughts turned to whether one of the trio could go on to challenge the world record, held by Jan Zelezny at 98.48m. “It’s hard to predict the javelin, you never know,” said Rohler. “But we’re giving our best to chase his record. I’m sure someone will get it one day.”

In the men’s pole vault, a non-scoring event, world champion Sam Kendricks bounced back from a disappointing performance in Shanghai to take victory here with a best of 5.81m, the US jumper one of the few athletes to handle the breezy conditions on the runway.

World record holder Renaud Lavillenie could only manage 5.56m, the Frenchman failing twice at 5.71m and then timing out on his third and final attempt, which left him fifth.

Armand Duplantis put up the strongest challenge to Kendricks on the night, the Swedish 18-year-old perfect over the opening three heights of 5.41m, 5.56m and 5.71m. That put him in the lead as the bar was raised to 5.81m, but that proved too much for Duplantis to cope with, as it did for third-placed Piotr Lisek of Poland, who bowed out at the same height after clearing a best of 5.71m.

Kendricks cleared 5.81m on his first attempt, a resounding return to form for the 25-year-old who could only manage 5.46m a fortnight earlier in Shanghai.

“Pre has always had a special place in my heart,” he said afterwards.

"The only person I haven't beat is @samkendricks [...] I was so close but I know since it's so hard to beat him, it's going to be so nice when I finally do beat him." – @mondohoss600#EugeneDL pic.twitter.com/UQOoleFYwC

The men’s 800m --also a non-scoring event here-- provided no shortage of drama and was capped off with a miraculous comeback by Emmanuel Korir, who was clipped entering the final turn and very nearly hit the deck. However, the Kenyan soon regained his balance and despite conceding several metres to Nijel Amos, he steadily reeled in the Botswanan down the home straight to take victory close home in 1:45.16.

Emmanuel Korir and Nijel Amos in the Eugene homestretch

In the men’s two-mile, Ethiopian 18-year-old Selemon Barega showed his rivals a clean pair of heels and his impressive range of gears on the final lap, which he covered in 54.83 to take victory in 8:20.01. Paul Chelimo of USA had no response to Barega’s pace down the home straight and came home second in 8:20.91, with Birhanu Yemataw Balew of Bahrain third in 8:21.54. 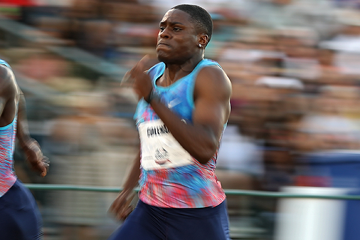 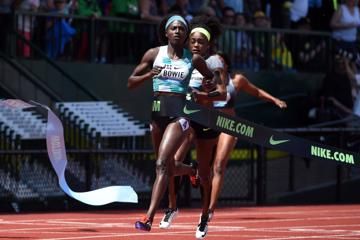 Mouth-watering clashes across the board in Eu... 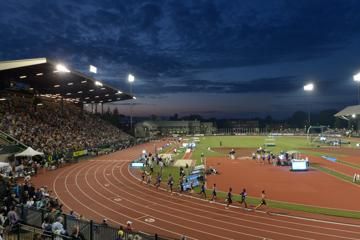