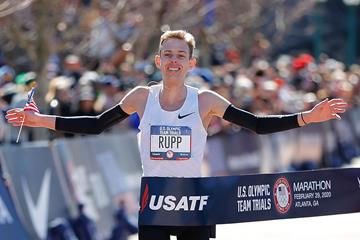 Galen Rupp and Aliphine Tuliamuk booked their spots to the Tokyo 2020 Olympic Games after churning out impressive victories at the U.S. Olympic Team Trials Marathon in Atlanta on Saturday (29).

Contested in chilly and windy conditions on a challenging undulating course, the goal was straightforward: finish in the top-three and an Olympic berth would be yours.

Rupp, who won the 2016 trials race in his debut over the distance and then went on to take Olympic bronze in Rio, used that experience to his advantage.

The Portland, Oregon, native broke from early leader Brian Shrader in the 16th mile, with Augustus Maiyo, Atlanta Track Club member Matt McDonald and Abdi Abdirahman in tow. That leader's group remained intact until mile 20 where Rupp put in a surge that created a three second cushion on Maiyo and McDonald, with Abdirahman another four seconds back.

Soon thereafter, the battle for the win was over as Rupp surged away, first to a 17 second lead after 21 miles, a lead he extended to 29 a mile later. He was a solitary figure when he crossed the line in 2:09:20, forced to wait nearly a minute to see who'd be joining him in Tokyo.

Jacob Riley, running sixth and 11 seconds behind the chase group at mile 23, fought his way into contention over the next two miles to eventually finish second in 2:10:02. Abdirahman held off Leonard Korir to finish third in 2:10:03 and punch his ticket for a fifth Olympic appearance at age 43.

"It's incredible. I feel relief almost more than anything," said Rupp, who has raced just twice since his fifth place finish at the Chicago Marathon in October 2018. Sidelined by a major foot injury, he returned to action in Chicago last October but didn't finish. "It's been a long year and a half.

In contrast, 11 women were in contention for the win when they reached the half in 1:14:38 before the pack began to string out by mile 16. There, Kellyn Taylor, debutante Molly Seidel and Tuliamuk formed the leading triumvirate, with Laura Thweatt, Des Linden and Sally Kipyego running another second back.

That pack remained until the 21st mile when Tuliamuk and Seidel decided to take command. Running together, they built a seven second lead over Kipyego a mile later, and extended it to 22 seconds by mile 23. Tuliamuk then broke away in the 25th mile to finish unchallenged in 2:27:23, seven seconds ahead of Seidel.

Kipyego, who won Olympic 10,000m silver for her native Kenya in 2012 and becames a US citizen last year, took the third spot in 2:28:52, 11 seconds ahead of one of the pre-race favourites, Des Linden.

"It was amazing," said Tuliamuk, a native of Kenya, who became a US citizen in 2016. "When we broke away, I kept saying 'Molly, let's go'. I knew it wouldn't happen by itself."

Seidel, who qualified for the trials by virtue of a 1:10:27 win at the Rock ’n’ Roll San Antonio Half Marathon in December, suffered from eating disorders and injury during and since her successful college career at Notre Dame where she took NCAA titles in cross country and indoors and outdoors on the track. She wasn't an unknown in Atlanta but was considered a long shot.