It was not quite the assault on 2.40m and above that was envisaged, but Mutaz Essa Barhsim took the world lead from Bogdan Bondarenko and the early points in Shanghai on Sunday (17) in what should be a year-long rivalry through the rest of the IAAF Diamond League.

Indeed, Bondarenko was the only one of the two to attempt a height above 2.40m. He had to, as two misses at 2.38m saw him trailing Barshim who sailed over it first time. When he missed his one and only attempt at 2.41m, Barshim opted not to go any higher.

Barshim won at 2.38m, a world lead one centimetre higher than Bondarenko had jumped at the IAAF World Challenge meeting in Kawasaki a week ago. Bondarenko was second at 2.32m – he had passed 2.35m as the top two played cat-and-mouse – ahead of China’s Zhang Guowei on countback at the same height.

Afterwards Barshim explained why he did not attempt to go higher.

“It’s too early,” he said. “This was my first competition and my body is not ready yet. I can jump it, but I don’t want to put my body under that stress so early in the season. The target here was to win.”

Bondarenko was not that close at either 2.38m or his one attempt at 2.41m. Barshim, too, had a little wobble, requiring two attempts at his second height of 2.29m and giving the bar a decent whack on the successful jump.

Barshim agreed he had struggled a little early. “I needed three or four jumps to get the rhythm,” he said.

Eaterini Stefanidi had set the pole vault pace at this early stage of the year, leading the outdoor list with 4.71m. But she lost the world lead here to Greek team-mate Nikoleta Kiriakopolou, who took the competition at 4.73m, an outdoor Greek record.

Stefanidi led at 4.58m, clearing that height first time as Kiriakopolou and Yarisley Silva took all three attempts to make it. The only other vaulter to attempt the height was China’s Li Ling who missed twice and then retired from the competition. She bowed out with 4.48m to her name.

Silva was the only one of the three to attempt 4.63m but failed all three attempts. Both Greek vaulters missed twice at 4.68m, but Kiriakopolou’s third-time clearance gave her the win. She then went to the winning height, clearing it at the second try.

The other world lead of the meeting came in the women’s shot put, with China’s Gong Lijiao throwing 20.23m to defeat Germany’s Christina Schwanitz, 19.94m, and Tia Brooks of the USA, 18.66m.

Gong, the world and Olympic bronze medallist, led the competition in the first round with 19.82m to Schwanitz’s 18.89. She retained the lead in the second round when both women threw their best distance and Schwanitz was unable to mount a challenge after that.

It was Gong’s second-best throw of her career, just 12cm shy of the PB she set six years ago.

Two others went within a whisker of world leads. Kaliese Spencer won the women’s 400m hurdles in 54.71 which was just 0.03 short of the world-leading 54.68 that world junior champion Shamier Little had clocked in the US less than 24 hours earlier.

The hurdles was as much about the man who was not there as anyone who actually ran. Liu Xiang, the 2004 Olympic and 2007 world champion and former world record-holder, was honoured with a farewell ceremony after the race, which performed its traditional Shanghai role of closing the meeting.

Oliver won with a Liu-like lean at the line to just hold off Orlando Ortega, 13.19. World record-holder Aries Merritt was third in 13.25 and China’s Xie Wenjun sixth in 13.36. 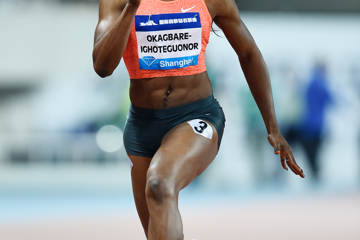