There was an air of familiarity for Ryan Whiting in the men’s shot put final on Friday (7) as arch-rival David Storl snatched the lead from him in the first and second round.

A similar thing happened at last year’s IAAF World Championships. After opening with 21.57m to take an early lead, Storl surpassed it 21.73m in the fourth round to win his second successive world title.

But today was different. Today it was Whiting’s turn to win a second consecutive global title.

In the fourth round, though, there was no beating Whiting as he sent his shot flying out to 22.05m. This time Storl couldn’t respond and Whiting successfully defended his title from 2012.

Perhaps the biggest shock of the competition was Tom Walsh, who equalled the outright Oceanian record with 21.26m to take bronze in what was his first ever indoor competition.

On two occasions in 2013, Nadine Broersen was poised to challenge for a championships medal but suffered some sort of misfortune.

At the 2013 European Indoor Championships, she was disqualified from the final event of the pentathlon, the 800m, when in reaching distance of the bronze medal. Then at the IAAF World Championships in Moscow, she clipped a hurdle in the first event; had she matched her season’s best, she’d have been close to the podium.

But this time the Dutchwoman made no mistakes. After taking the lead following a 1.93m leap in the high jump, she continued with her series of solid marks. A 6.17m indoor PB in the long jump gave her a comfortable margin going into the 800m and she held on to that lead.

Six of the eight pentathletes, including Broersen, set a PB in the 800m. Her 2:14.97 brought her winning tally to 4830, her second Dutch record of the day after her 1.93m high jump clearance.

Just like at the World Championships, Brianne Theisen Eaton had to settle for silver but was rewarded with a Canadian record of 4768. Ukraine’s Alina Fodorova took third with a PB of 4724.

Following this morning’s heats, athletes were back on track for the second round of the 400m, only this time with a bit more drama.

Chris Brown and Pavel Maslak, the two fastest men in the opening round, were both semi-final winners this evening. Maslak stayed out of trouble at the front and could afford to ease down, but still managed a 45.79 clocking, the fastest of the day.

Jamaica’s Edino Steele initially finished in an automatic qualifying spot but was disqualified for a lane infringement. It meant that Lalonde Gordon, the fastest 400m runner in Sopot, moved up one place into a qualifying spot.

In the women’s 400m, Russian champion Kseniya Ryzhova was run out of a high-quality second semi-final. USA’s Francena McCorory won it in 51.35 from Kaliese Spencer (51.58) and Shaunae Miller (51.63).

But Ryzhova’s 51.64 – which would have won the first semi-final by more than one second – was only good enough for fourth place, so she won’t be in the final.

Jamaica’s Patricia Hall won the first semi-final in 52.82. In a scrappy race, Denise Rosolova fell over while Poland’s Justyna Swiety came through for second place ahead of Lisanne de Witter of the Netherlands.

Eaton gets back on course for world record

Defending heptathlon champion Ashton Eaton returned to the Ergo Arena this afternoon with performances in the shot put and high jump that puts him back on track in his quest to break his own world indoor record.

A 14.88m effort in the shot was followed by 2.06m in the high jump, meaning a world indoor record is now looking fairly likely tomorrow.

But the real surprise of the heptathlon competition this afternoon was Andrei Krauchanka in the high jump. His 2.21m clearance was the best ever within a heptathlon at the World Indoor Championships.

Sally Pearson was another defending champion in action. The Australian impressed in the first of the 60m heats with a 7.79 clocking, the fastest ever heat time in World Indoor Championships history.

All of the other main protagonists made it through to tomorrow’s semi-finals too, including US champion Nia Ali (7.87) and French champion Cindy Billaud, whose 7.87 was a PB.

The first round of the men’s 60m was similarly straight-forward with no significant casualties. British duo Richard Kilty (6.53) and Dwain Chambers (6.57) led the qualifiers into the semi-finals along with Germany’s Lucas Jakubczyk (6.57).

US champion Marvin Bracy was just 11th fastest overall, finishing third in his heat in 6.60. Jamaica’s Nesta Carter finished in the same position in the fourth heat with 6.58.

Before today, few would have hailed Poland’s Adrian Strzalkowski as a medal contender in the men’s long jump. After all, he had never before broken eight metres, indoors or outdoors, and was up against a field that included the world champion, the defending world indoor champion, the 2008 Olympic champion and the 2010 European champion.

But much to the delight of the home crowd, Strzalkowski produced the performance of his life with a national indoor record of 8.18m to sail into the final as the best qualifier.

It’s not often that athletes compete wearing headwear, much less during indoor competition, but Kenya’s Caleb Ndiku was clearly still feeling the chill from outside and he contested his 3000m heat wearing a woolly hat.

It seemed to do the trick, too, as he won in 7:42.75. Behind him, medal favourites Hagos Gebrhiwet and Bernard Lagat qualified comfortably, while Augustine Choge won the first heat in 7:44.85. Dejen Gebremeskel and Galen Rupp also made it through as this once again looks set to be one of the highest-quality events at the IAAF World Indoor Championships.

USA’s Heather Kampf only found out earlier this week that she was going to be competing in Sopot after team-mate Mary Cain withdrew with injury. Kampf seized her chance and dictated the pace in the first heat, only being overtaken on the final lap by Rababe Arafi.

The Moroccan won in 4:10.95, while Kampf was rewarded with a PB of 4:11.27 to grab the second automatic qualifying spot.

World champion Abeba Aregawi made the second heat a fast one, winning comfortably in 4:08.74 from Ethiopia’s Axumawit Embaye as three other athletes qualified by time behind them.

The final 1500m heat was won by USA’s Treniere Moser in 4:12.63 with Albania’s Luiza Gega grabbing the last place in the final. 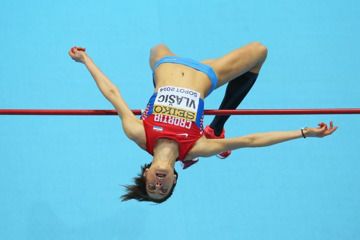