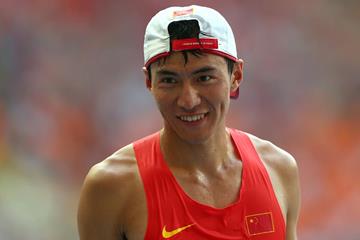 Olympic champion Chen Ding led all the way from the start to secure his first victory at the IAAF Race Walking Challenge meeting in Taicang on Friday (1) while 2014 IAAF World Race Walking Cup junior winner Duan Dandan upset a strong field in the women’s race to maintain China’s dominance.

It was Chen’s fourth appearance at the meeting in Taicang and the fifth consecutive year he has competed in the Chinese city as it hosted last year’s World Race Walking Cup. But it was the first time that the 22-year-old had made it on to the top step of the podium in Taicang, winning in a season’s best of 1:19:53.

Chen and Japan’s Kai Kobayashi took an early lead, but Chen soon forged ahead on his own, leading after the first two-kilometre lap.

Kobayashi, who set his best time of 1:19:12 to finish fourth at the highly competitive Asian 20km Race Walking Championships in Nomi in March, was soon caught by the chasing group. Nobody else managed to pose a real threat to the lonely leading Chen.

Chen went through 4km in 15:57 and the half-way mark in 39:56. Chen’s margin had grown to more than a minute after the sixth lap. From there on, he never looked back.

“Today’s strategy is very successful, although I felt a little bit tired at the end,” said Chen, who usually opts for a more patient strategy.

“I did not think too much about the victory. I just wanted to try this strategy and get prepared for the World Championships in August,” he added. “In Beijing it will also be very hot, hopefully I can race to my best level by then. I was very relaxed and in general I am satisfied with my performance.”

Chen’s  winning mark is more than two minutes slower than his personal best of 1:17:40 set in Taicang in 2012, but it was a significant improvement on his previous season’s best of 1:21:11, set when finishing third at the National Race Walk Grand Prix in Beijing.

China’s Wang Kaihua cut five seconds from his PB set in March as the sixth-place finisher at the 2011 IAAF World Youth Championships emerged from the chasing group to finish second in 1:21:17.

The IAAF Race Walking Challenge in Taicang has usually been held in March or April but the event has been consistently bothered by rain. This time the races were staged in clear conditions but the relatively high temperature, which was higher than 20 degrees Celsius, caused some trouble for the race walkers, especially in the women’s 20km.

The 19-year-old Duan Dandan, the junior 10km winner at the 2014 World Race Walking Cup in the same city, took a surprising victory as she out-shone some of her more experienced team-mates to record a best time of 1:32:21, 24 seconds faster than her previous PB set in La Coruna in 2013.

Pre-race favourite Lu Xiuzhi, who set an Asian record of 1:25:12 in March, dropped out after 10km while another Chinese athlete Nie Jingjing, whose PB is 1:27:51, failed to finish as well.

But Duan was not the fastest female race walker on course.

The challenge event in Taicang was conducted together with the Chinese Grand Prix and 21-year-old Youth Olympic silver medallist Mao Yanxue, whose name was only on the domestic entry list, clocked 1:32:17 to win the national grand prix title.

It was the fourth edition of event since the challenge meeting was first launched in 2011. Chinese female race walkers have grabbed the top three places in all the four races.