Kenya’s Titus Ekiru was the surprise victor at the 33rd edition of the Zurich Maratón de Sevilla on Sunday (19), improving the course record at this IAAF Silver Label Road Race to 2:07:43. In the women’s race, Spain’s Paula González successfully defended her title with a massive career best of 2:28:54.

Perfectly paced by Spain’s Jesús España, the men’s race kicked-off at a steady 3:02 clip to target the 2:08:14 course record set last year. The opening 10 kilometres were covered in 30:28 with all the key favourites comfortably travelling behind the two pacesetters, España and Amanuel Mesel of Eritrea.

Pacing over the same circuit which witnessed his debut last season, España led the top group exactly until the half marathon point, with the clock reading a promising 1:04:05. Seven men were in contention, the nearest being unheralded 25-year-old Ekiru and compatriot Shadrack Kipkosgei.

Once Mesel – a 2:08:17 marathon runner who lives for much of the year in Madrid – took command of the race the tempo heated up by some four seconds per kilometre. That whittled down the group gradually and by the 30 kilometre point only four men remained in contention: the Kenyan trio of Ekiru, Kipkosgei and Kipkemboi Kinsang and Ethiopian Tariku Kebede, a 2:12 performer. Mesel dropped out after signing off on a brisk 29:40 10km split to leave the favourites on a perfect path to crack 2:08.

From then on the race turned into a marvellous exhibition from Ekiru, who dictated the pace relentlessly despite the modest career bests of 1:02:26 and 2.15:43 he brought to Seville. He left his three pursuers behind some 1:48 into the race with six kilometres remaining. His 2:00:50 split at the 40th kilometre clearly suggested the course record was going to be broken although Ekiru still had to hold off Kebede, who was still in pursuit during the waning stages in the stadium.

Ekiru held on for the victory in 2:07:43, five seconds clear of the Ethiopian who was contesting his third marathon. Kipkosgei completed the podium in 2:08:26, a career best by more than a minute.

“It’s true that my PB was only 2:15:43 but I’ve been training with several 2:05 marathoners in recent months and I managed to follow their pace in our training sessions so I knew I could run quite fast,” Ekiru said. “Anyway, I didn’t expect to win.”

Clever tactician González does it again

The women’s event saw the early leadership by African runners – Ethiopians Tizita Terecha Dida, Bekelech Daba Debaba and Lemelem Yachem plus Kenya’s Salome Jerono Biwott – controlling the tempo. Following in the pacemaker’s footsteps, they covered the initial 10 kilometres in 34:44 with Britain’s Lily Partridge 17 seconds behind and González another five seconds adrift in the company of Kenya’s Pauline Wangui.

By the 12th kilometre the tandem of Bedada and Terecha shared the lead while González and Wangui joined Partridge in the chase group. By the midrace point, reached by the Ethiopians in 1:12:42, they extended their lead to more than a minute.

A fading Terecha could not resist Bedada’s rhythm, thus the latter became a lonely leader with the clock reading 1:46 and 12 kilometres still remaining. Beginning her charge from behind, the 31-year-old González got plenty of vocal support from the crowd and found the extra energy needed to begin her assault on the Ethiopian leaders. It was at the 38th kilometre when the Spaniard caught Bedada and broke away immediately and open an increasingly wide margin through to the finish.

Over the closing stages Wangui also managed to overtake Bedada while González reached the finish unthreatened in 2:28:54, knocking nearly three minutes from her previous best in her second appearance over the distance. Wangui was the runner-up in 2:30:49 while Bedada had to settle for third in 2:31:47. Partridge finished fourth in her debut clocking a promising 2:32:10.

“Last year I chose this race to make my debut and I managed the qualifying time for the Rio Olympics,” said González, who is coached by her partner Germán Martínez. “Unfortunately, I missed that event through injury but I’m now fully recovered and came here with a goal of running under 2:30, so I’m now over the moon. I hope this performance allows me to qualify for the London World Championships in August.”

BACK
Pages related to this articleAthletes
Paula Gonzalez 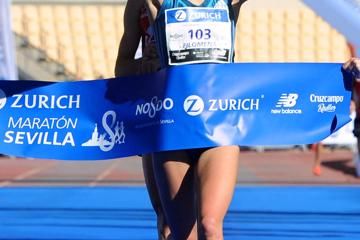 Cherono and Costa triumph at the Seville Mara...