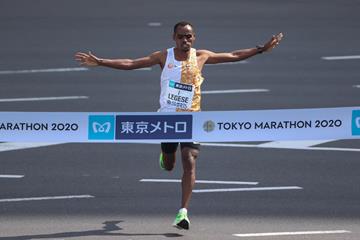 Legese just missed the course record by 18 seconds, but the men’s race witnessed unprecedented depth with 17 men finishing inside 2:08 – including Suguru Osako, who held on to his Olympic qualifying place by breaking the Japanese record with 2:05:29 in fourth place. Salpeter, meanwhile, moves to sixth on the world all-time list.

The pace maker dropped out at 30km and three remaining runners ran together for another five kilometres before Mengstu started to falter. Finally, at 38.5km, Legese surged away from Lemma for victory in 2:04:15, 33 seconds faster than his winning time last year.

“The weather was good, unlike last year,” said Legese. “It was a little windy, but no rain. 2:04:15 is a good time. I thought I could have run faster today, but it was little bit windy.”

Bashir Abdi came from behind to pass the faltering Lemma, finishing second to take 85 seconds off his own Belgian record with 2:04:49. Lemma was third in 2:04:51, but Mengestu faded to seventh. Getaneh Molla, owner of the fastest debut marathon in history, faded to 19th.

Japanese fans, though, were keenly watching Suguru Osako, Hiroto Inoue and Yuta Shitara to see who would contend for the third open spot on the national team for the Olympics. Osako and Inoue ran in the lead group which was on 2:03 pace, while Shitara stayed behind in the chase pack, still running inside Japanese record pace.

Inoue stayed near the front of the lead pack while Osako held on at the back. After the half way point, Osako started to drift back and was running alone for nearly 10 kilometres, but then he started to chase Inoue and by 32.5km he had caught up with Inoue’s group. 200 metres later Osako went to the front of the pack and started to push the pace.

By 35km Osako was up to fifth. Although he was troubled with a side stitch in the closing stages, he held on and improved his own national record from 2:05:50 to 2:05:29. Next weekend’s Lake Biwa Marathon is the final qualifying opportunity for Japanese athletes hoping to make the Olympic team, but they will need to break Osako’s record to bump him off the squad.

"It was a tough race, but I was only thinking about winning," said Osako.

On a great day for Japan, three more Japanese men placed in top 10, two of them finishing inside 2:07, while seven more Japanese cracked 2:08. All but Yuta Shitara in 16th place set a personal best.

Lonah Chemtai Salpeter dominated the women’s race, winning in an Israeli record of 2:17:45 to smash the previous course record of 2:19:47.

She pulled away from two-time Tokyo Marathon champion Birhane Dibaba after 35.5km and opened up a 50-second gap in the next seven kilometres.

Dibaba also finished inside the previous course record, clocking a PB of 2:18:35. Asefa Kebede was third in 2:20:30, a three-minute improvement on her personal best, while Selly Chepyego was fourth in 2:21:42. Ethiopia’s 2015 world 5000m silver medallist Senbere Teferi ran in the front pack for the first half of the race, but then faltered to finish seventh in 2:25:22.

The Japanese federation and the organisers asked fans to stay home and watch the race on TV, but a good number of spectators have lined up along the course anyway.